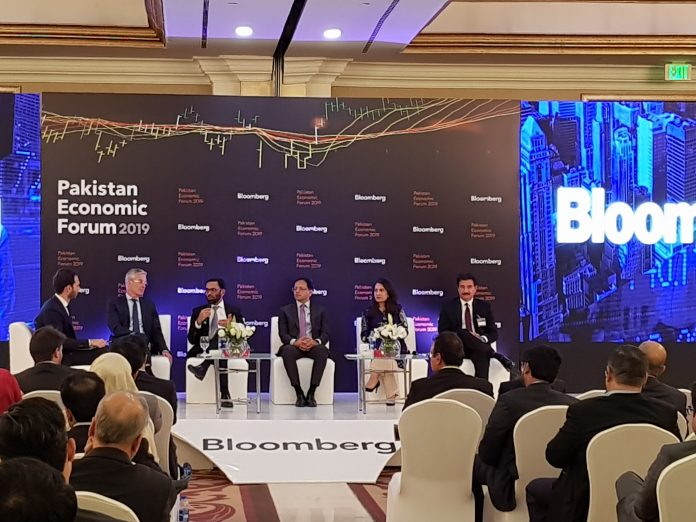 KARACHI: The Pakistan Economic Forum 2019 was held on Monday in Karachi. The annual event was organized by Bloomberg with a purpose to bring together all the key stakeholders for a discussion on the major economic issues being faced by Pakistan. It also provided an opportunity for Bloomberg to connect with its existing and potential clients.

The event kicked off with a keynote address by Finance Minister Asad Umar, who talked about Pakistan’s economy and the challenges it faces.

The finance minister highlighted two main areas of concern in the economy; the capital market and the availability of development expenditure.

“Capital markets are not mobilizing investment — in the case of equity it’s inadequate what they’re doing and in the case of debt, it’s virtually nothing that’s done,” said the minister.

He said all stakeholders in Pakistan’s capital market agree that the market is over-regulated and promised that he plans to bring about reforms to counter that.

The finance minister also highlighted the lack of development expenditure available to the government and provided what he thinks is a possible solution.

“We need developmental expenditure but we don’t have the fiscal space for it. The solution is to put in far more emphasis on using public-private partnerships, and get the private investment into the domain of what traditionally the government has done,” said the minister.

Asad Umar, in his address, also emphasised on working as a team with the business community of the country.  “I strongly believe in the fact, and that’s the message I’m going to leave here, that unless we work as a single team, there is no way we’ll succeed,” said the minister.

“Unless we are able to grapple the three core macroeconomic issues which are low savings, low revenue generation and a high trade gap, sustainable growth will continue to be a challenge.” said Bajwa.

The SBP governor also stressed the need to raise tax to GDP ratio to 15pc. Owing to an increase in the defense expenditures and debt servicing, he expressed that it has now become compulsory to increase government receipts, if they are to improve the health of Pakistan’s fiscal accounts.

Ziad Daoud, an Economist at Bloomberg L.P. , also spoke at the event. He brought an international perspective to the entire discussion. He said that according to data compiled by Bloomberg, the global economy has slowed down in the past couple of years but the good news is that this decline is not expected to persist.

“The one overriding objective to lift Pakistan’s capital market upwards is to penetrate the 50 million strong middle class of Pakistan,” said Richard Morin.

The panel led a healthy discussion and after a comment by Sohail it diverted to focus on the structural issues faced by capital markets and the discrepancies stock market faced when compared with alternate saving institutions.

Junaid Hanif
The writer is Business Reporter at Pakistan Today. Apart from his day job, he likes to indulge in the sweet science of Boxing. Reads politics and economics. He can be reached at [email protected]