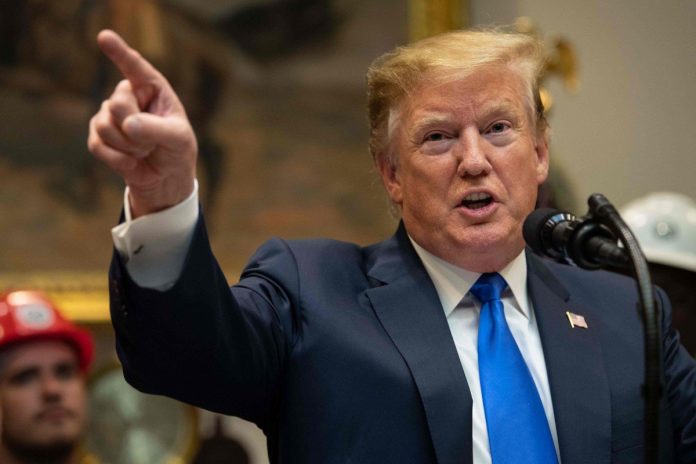 WASHINGTON/BEIJING: US President Donald Trump said on Friday he was in no hurry to sign a trade deal with China as Washington imposed a new set of tariffs on Chinese goods and negotiators entered the second day of last-ditch talks to try to salvage an agreement.

The United States early on Friday increased its tariffs on $200 billion in Chinese goods to 25pc from 10pc, rattling financial markets already worried the 10-month trade war between the world’s two largest economies could spiral out of control.

The move, which is expected to lead China to retaliate, went into effect just hours after US Trade Representative Robert Lighthizer, US Treasury Secretary Steven Mnuchin and Chinese Vice Premier Liu He ended a first day of talks in Washington without a deal.

They resumed negotiations on Friday morning.

In a series of morning tweets, Trump defended the tariff hike and said he was in “absolutely no rush” to finalize a deal, adding that the US economy would gain more from the levies than any agreement.

“Tariffs will bring in FAR MORE wealth to our country than even a phenomenal deal of the traditional kind,” Trump said in one of the tweets.

Despite Trump’s insistence that China will absorb the cost of the tariffs, US businesses will pay them and likely pass them on to consumers.

Global equities sagged after his comments. MSCI’s All-Country World Index, which tracks stocks across 47 countries, was down 0.8pc in London. US stock indexes, which have fallen sharply this week, opened lower again

Trump, who has adopted protectionist policies as part of his “America First” agenda and railed against China for trade practices he labels unfair, said the trade talks, originally due to last two days, could drag on beyond this week.

“We will continue to negotiate with China in the hopes that they do not again try to redo deal!” said Trump, who has accused Beijing of reneging on commitments it made during months of negotiations.

Following the US tariff hike, China’s Commerce Ministry said it would take countermeasures but did not elaborate.

The ministry said it “hopes the United States can meet China halfway, make joint efforts, and resolve the issue through cooperation and consultation.”

Under the latest US action, US Customs and Border Protection imposed a 25pc duty on more than 5,700 categories of products leaving China after 12:01 a.m. EDT (0401 GMT) on Friday.

Seaborne cargoes shipped from China before midnight were not subject to the new tax as long as they arrived in the United States prior to June 1. Those cargoes will be charged the original 10pc rate.

“This delay might create an unofficial window during which the US and China can continue to negotiate,” investment bank Goldman Sachs wrote in a note, adding that it was a “somewhat positive sign” that talks were continuing.

Trump gave US importers less than five days notice about his decision to increase the rate on $200 billion worth of goods, which now matches the rate on a prior $50 billion category of Chinese machinery and technology goods.

He has also threatened to impose new tariffs on another $325 billion in Chinese imports.

Many business groups have opposed the tariffs, saying they will be disastrous for companies and lead to higher prices for consumers across a range of products.

Gary Shapiro, chief executive of the Consumer Technology Association, said the tariffs would be paid by American consumers and businesses, not China, as Trump has claimed.

“Our industry supports more than 18 million US jobs – but raising tariffs will be disastrous,” Shapiro said in a statement.

It may take three or four months for American shoppers to feel the pinch but retailers will have little choice but to raise prices to cover the rising cost of imports before too long, economists and industry consultants say.

Mats Harborn, president of the European Union Chamber of Commerce in China, said, “European companies are watching aghast as the US and China play Russian roulette with the world economy.”

The biggest Chinese sector affected by the latest tariff increase is a $20 billion-plus category of internet modems, routers and other data transmission devices, followed by about $12 billion worth of printed circuit boards used in a vast array of US-made products.

Just hours after the US move, which will add pressure on an already slowing Chinese economy, China’s central bank said it was fully able to cope with any external uncertainty.

On Monday, the People’s Bank of China cut the amount of reserves that some small and medium-sized banks need to hold, freeing up funds for lending to cash-strapped businesses.

James Green, a senior adviser at McLarty Associates who until August was the top USTR official at the embassy in Beijing, said he expected China would increase non-tariff barriers on US firms, such as delaying regulatory approvals.

“I think the Chinese in the end will want to keep negotiations going. The question is: ‘where do they go for retaliation?’” he said.

Even without the trade war, China-US relations have continued to deteriorate, with an uptick in tensions over the South China Sea, Taiwan, human rights and China’s plan to re-create the old Silk Road, called the Belt and Road Initiative.