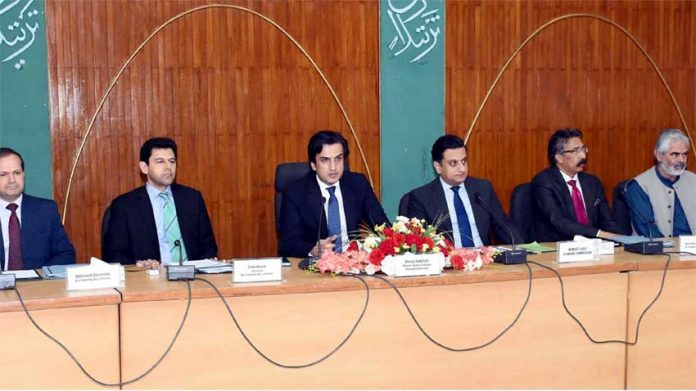 ISLAMABAD: The government on Thursday proposed a national development outlay of Rs1.837 trillion with a provincial contribution of Rs912 billion.

The decision was made at a meeting of the Annual Plan Coordination Committee (APCC) held under the chairmanship of Planning, Development and Reform Minister Makhdoom Khusro Bakhtiar.

Finance ministers, federal secretaries and other high-level officials from the federal and provincial governments were also present on the occasion.

During the meeting, the Ministry of Planning apprised the stakeholders about the underlying priorities of the development framework and presented the federal Public Sector Development Programme (PSDP) for 2019-20 with an allocation of Rs675 billion.

Initially, the meeting was informed that the innovative financing of infrastructure projects, with an allocation of Rs250 billion, would enhance the role of the private sector.

Apart from infrastructural development, social sector was also given importance in the list of government priorities.

The meeting was informed that special importance would be given to the backward and remote areas especially Balochistan, South Punjab, rural Sindh and southern Khyber Pakhtunkhwa.

It was further informed that the projects under China Pakistan Economic Corridor (CPEC) have been provided sufficient resources required for their completion as per schedule.

Speaking on the occasion, the planning minister highlighted the performance of the economy amidst backlog of serious macroeconomic imbalances. He reaffirmed the government’s commitment to equitable development.

Bakhtiar apprised the participants about the challenging adjustment process constraining the expansion of the development portfolio. “However, the government is optimizing economic returns by investing in projects with a higher socio-economic return.”

Giving broader outlines of the next financial year’s PSDP, the minister said that this would be the incumbent government’s first development portfolio under serious budgetary constraints.

The minister said the growth strategy of the government was to create more opportunities for the poor and vulnerable and support regional equalization.

He highlighted that the previous government mismanaged the PSDP 2018-19 in the last year of its term by adding 393 projects with a throw-forward of Rs2 trillion, which was 33pc of the total throw-forward against a meagre allocation of Rs55 billion.

During the meeting, the Ministry of Planning gave an overview of the performance of the economy in current fiscal year (2018-19) and macro-economic targets for the next fiscal year (2019-20).

The participants were informed that the government was making concerted efforts to stabilise the economy so that structural imbalances could be corrected and long-term growth potential could be realised.

After giving a broad overview of the development framework, a detailed discussion was held with individual ministries. They were told that the provincial priorities were already reflected in the PSDP through extensive consultative process with the provincial and regional governments.

The meeting decided to formulate a coordination committee under the planning secretary with representation from all provinces. The proposed committee would make a monthly review of ongoing projects, whereas quarterly review would be conducted by the minister.