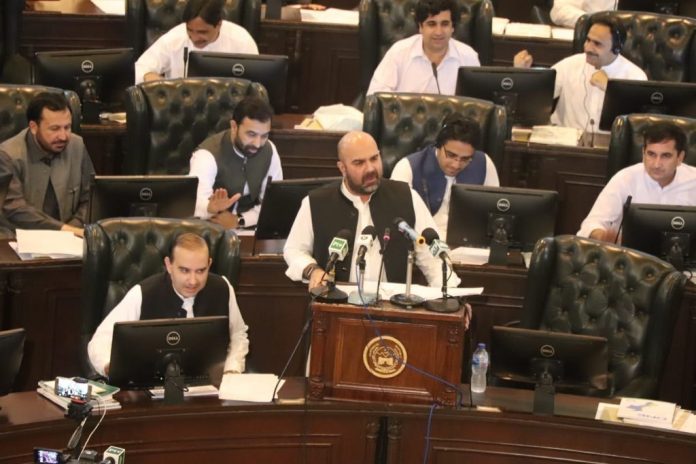 The provincial finance minister presented the annual budget in the KP Assembly amid uproar by the opposition benches that were protesting the non-issuance of a production order for former president Asif Ali Zardari who in the National Accountability Bureau’s (NAB) custody in a corruption case.

Giving a breakup of the revenue, he said that the total revenue for the fiscal year 2019-20 would be Rs900 billion, including Rs453.2 billion from Federal Tax Assignments (FTA), Rs54.5 billion, one percent from divisible pool under the head of war on terror, Rs25.6 billion from oil and gas royalty and surcharges, Rs21.2 billion from net profit of power generation, Rs34.5 billion from NHP, Rs53.4 billion from provincial taxes and non-taxes, Rs82 billion from Foreign Projects Assistance, Rs151 billion grant for tribal districts, and Rs24.7 billion from other miscellaneous sources.

“The KP government has also set Rs53.4 billion target for Khyber Pakhtunkhwa Revenue Authority (KPRA) for the fiscal year 2019-20 making it 54 per cent more than the performance of this year,” said Jhagra.

He emphasised that it was through austerity that the government had saved Rs95 billion during the outgoing fiscal year and this had enabled the enhancement of the province’s development programme making it possible for KP to be at par with other developed provinces sooner than later.

“Similarly, salaries of civil servants posted against positions with additional allowance will also not be increased,” he added.

He said that the government would take the revenue target to Rs100 billion by 2023, which would be three times higher than the current revenue of the province, adding that the revenue generation would be tax based.

In this regard, provincial income taxes are being increased for the current fiscal year.

Furthermore, Rs24 billion have been allocated for 17,000 vacant posts and regularisation of the Khasadar force and levies.

He also thanked armed forces who voluntarily reduced their budget and included their share in the development of tribal districts which, he said, was the real spirit and identity of Pakistan.