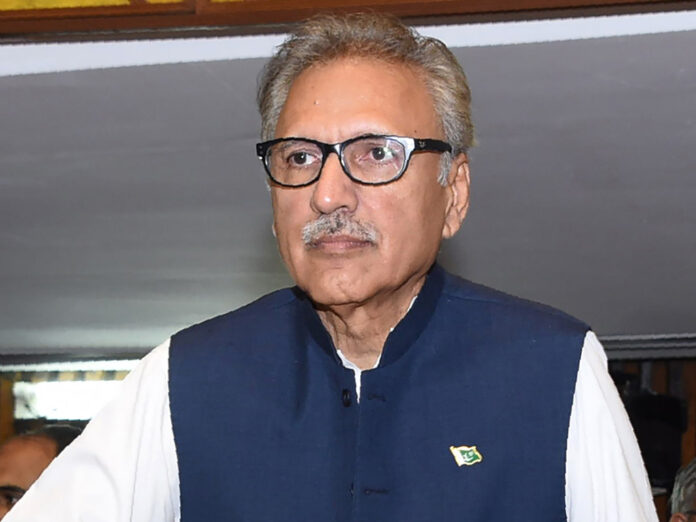 KARACHI: President Dr Arif Alvi has said that the country’s economy was going through historic difficulties as the incumbent government only inherited debts and deficits.

“A major chunk of revenue is being consumed to clear the debts, leaving limited resources for development work. However, the current account deficit has been narrowing down due to the recent fall in imports and rise in exports,” the president maintained, while exchanging views with Karachi Chamber of Commerce of Commerce and Industry (KCCI) Acting President Khurram Shahzad and Businessmen Group General Secretary & former KCCI president AQ Khalil at the President House.

Highlighting the achievements of the government, Dr Alvi said that the inflow of remittances was appreciating while the foreign reserves of the country were also improving.

“The Financial Action Task Force (FATF), International Monetary Fund (IMF) and other international donor agencies are closely monitoring the initiatives and activities being made by the present government and also the strategies devised by the Federal Board of Revenue (FBR), which have resulted in improving the number of taxpayers,” he stated. “We anticipate the number of registered persons for sales tax to rise in days to come”.

As improvement in revenue generation has been witnessed during the last two months, it was expected that the FBR and the Ministry of Finance would refrain from introducing any mini-budget or additional taxes to reduce the deficit, he said.

The president lauded that the business community for playing a commendable role in the progress and prosperity of Pakistan. He hoped that the business & industrial community would continue to strive hard with same zeal and enthusiasm to promote the positive image and the investment opportunities available in Pakistan.

He said he would urge the government to accommodate the representatives of the business community in policymaking. “It is the business community which not only contributes to the economic development but also plays a major role in the progress and development of other sectors, particularly the health and education sectors. We hope that they will play a similar role in the progress of other sectors as well,” he added.

“The Sui Southern Gas Company (SSGC) is not providing gas at an adequate pressure to the industries, which is terribly affecting the production capacity of many industrial units,” he lamented, requesting the president to take up the matter with SSGC’s management.

He also pleaded for a high-level meeting with K-Electric so that a proper code of conduct for the utility service provider could be finalized in consultation with all stakeholders.

He said that it was a good omen that the number of filers has increased, adding that the government must be appreciated for encouraging the masses to file their returns without giving any specific deadline.

AQ Khalil said the government must thoroughly elaborate its policies to the stakeholders, besides addressing their grievances in order to make the policies successful,” he added.

Referring to the targets set in the budget for the current fiscal year, he said it was a matter of grave concern that the government was missing numerous targets that were set to deal with deficits.

“The primary deficit was to be brought down from 1.8pc of GDP to 0.6pc of GDP in the current fiscal year, but, instead of declining, this deficit has gone all the way up to 3.6pc,” he noted. “It means that the government will have to carry out massive adjustments of Rs1.3 trillion to reduce the primary deficit to 0.6pc of the GDP, which, the business community fears, will be done through another mini-budget or imposition of additional taxes.