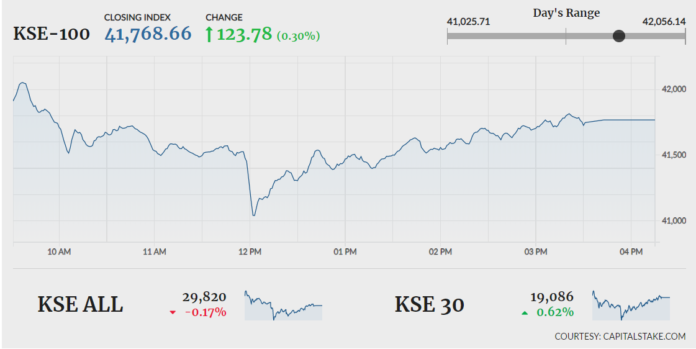 KARACHI: The Pakistan Stock Exchange (PSX) witnessed a volatile trading session on Tuesday, as the benchmark KSE-100 Index experienced a high jump and a steep fall.

The index stormed past the 42,000-mark (for the first time in 2019) soon after the commencement of the session. However, at noon, the index had nosedived on media reports regarding former president and COAS Pervez Musharraf’s death sentence.

Other major developments of the day included approval of a price hike by the Oil and Gas Regulatory Authority (OGRA). According to the regulatory body, gas price for domestic consumers has been increased by 191pc, while that for the fertilizer sector has been hiked by 135pc hike. Similarly, a 31pc surge has been approved for consumers falling under the category of roti tandoor, commercial, industrial, zero-rated export industry, captive power plants, compressed natural gas (CNG), cement and power plants.