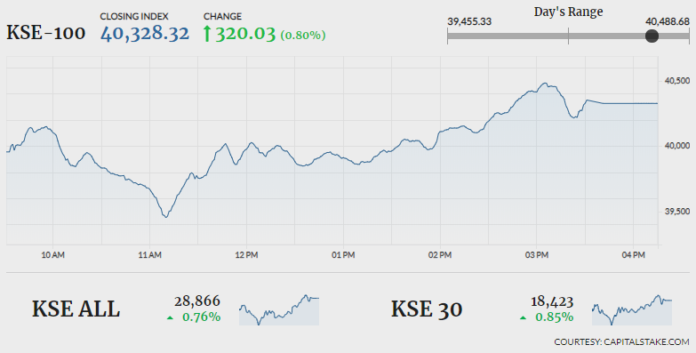 KARACHI: The Pakistan Stock Exchange (PSX) witnessed a volatile session on Tuesday as the bulls who were nowhere to be seen by midday staged a strong comeback in the late hours, helping the benchmark KSE-100 Index close with decent gains.

The market opened with media reports regarding the International Monetary Fund’s (IMF) staff-level report that was finalised during the IMF team’s visit to Pakistan. As per the report, Pakistan remains at risk of being placed on the FATF “blacklist” which can have implications on the country’s capital inflows.

The KSE-100 Index opened slightly positive but soon plunged to its intraday low at 39,455.33 after losing over 500 points. Following a brief battle between bulls and bears, the former managed to gain control in the late trading hours, helping the benchmark index gather around 1,000 points to touch its intraday high at 40,488.68. The index finally settled higher by 320.03 points at 40,328.32.

On the market front, Attock Refinery Limited (ATRL +1.32pc) and National Refinery Limited (NRL +1.14pc) have urged the government to form a working group on the issue of furnace oil crisis faced by local refineries.

Moreover, Dewan Sugar Mills Limited (DWSM +11.46pc) reported a loss per share of Rs5.98, a reduction of 31pc when compared with last year.