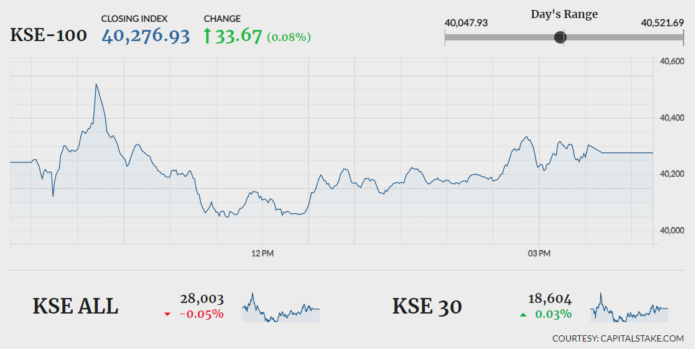 KARACHI: It was a dull start to the trading week at Pakistan Stock Exchange, as the incides kept trading within a narrow range before closing flat.

Investors preferred to stay on sidelines as they awaited the Financial Action Task Force’s official decision regarding Pakistan.

According to media reports, FATF has found Pakistan “fully compliant” on 14 of the 27-point action plan, showing the country “is making progress to comply with all its conditions”.

Sectors that helped the index recover some ground included banking (+74.03 points), oil & gas marketing (+23.30 points) and technology (+9.16 points). Among the companies, Habib Bank Limited (HBL +108.14 points) turned out to be the top positive contributor to the index.

Meanwhile, Habib Bank Limited rejected a media report that claimed to have identified “a few weaknesses at HBL UAE branch in the year 2017”. HBL maintained that the bank has transformed its control and compliance processes to ensure “they are in line with international standards”.