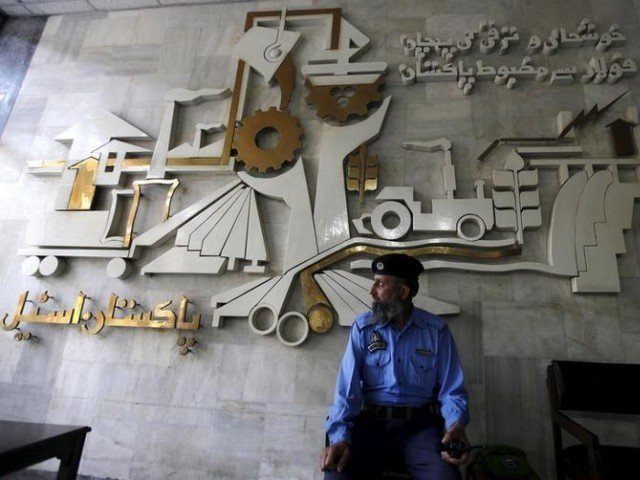 ISLAMABAD: The Economic Coordination Committee (ECC) on Wednesday approved firing all employees of the Pakistan Steel Mills (PSM), reasoning that the mills haven’t been functioning for years and the employees haven’t been doing anything.

There are 9,350 employees who will be fired within a month and another 250 will be let go within three months.

The ECC meeting, chaired by PM’s Adviser of Finance and Revenue Abdul Hafeez Shaikh, also approved a Rs20 billion package for the employees, which amounts to Rs2.3 million per person.

Though the mills have been closed for years, they are running a Rs550 billion deficit and billions are being spent on debt servicing. However, the move will not be finalised until it is approved by the federal cabinet.

Sources said that PSM stopped its commercial operations in June 2015 without formulating any Human Resource (HR) plan for its 14,753 employees, now reduced to 9,350. Presently, the per month net salary bill of PSM employees is approximately Rs350m, adjusted as a loan in the financial accounts of PSM. Since 2013, an aggregate loan of Rs34bn has been extended to PSM by the government on account of net salary payment.

The ECC also set up a body to explore options to hedge oil prices. The ECC decided to set up a committee headed by PM’s Special Assistant on Petroleum Nadeem Babar and representatives from the State Bank of Pakistan (SBP), Pakistan State Oil (PSO), Finance Division, Petroleum Division, Law Division and Planning Division to explore options for 15 million barrels of oil for one or two years –divided in 12 equal monthly amounts — for different stock prices above the current Brent as long as the fee is within acceptable range.

Under the TORs, which can be readjusted by the committee in the light of future developments, PSO will act as the counter-party while the Ministry of Finance shall give a guarantee of performance by the PSO, according to a Finance Ministry statement.

The Oil and Gas Regulatory Authority (OGRA) would also be given the policy direction to include the monthly price of the option in the cost of LNG or any other oil product chosen in announcing the monthly prices.

The ECC also discussed the reported shortage of petrol in some cities and asked the Ministry of Energy, Competition Commission of Pakistan and OGRA to ensure that requisite stocks were maintained by the OMCs and the supply to the fuel stations across the country was regular.

On another proposal by the Ministry of Energy, the ECC considered and approved reimbursement of operational cost of Single Point Mooring (SPM) installed by Byco. Under the decision, Byco would submit the actual audited operating cost of the SPM (excluding Wharfage/FOTCO charges/crude saving) to OGRA for inclusion in IFEM subject to a cap of PARCO rate, while OGRA shall determine the actual impact for inclusion in the IFEM on the ongoing basis.

Consequently, with the implementation of the above decision, Byco will withdraw its case from the Supreme Court and would also provide an undertaking that the ECC decision conclusively closes the pending matter of SPM’s costs.

On another proposal by the Ministry of Energy, the ECC asked the Finance Division to release an amount of Rs 1 billion to meet the cost over and above the criteria for supply of gas to villages and localities falling within 5 kilometers radius of gas-producing fields as per instructions of the Supreme Court.

The ECC also took up a proposal by the Ministry of Energy for payment of unrecovered fixed costs of Rs43.7bn to the IPPs and asked the Finance Division to release Rs23bn while the issue of remaining payments would be resolved by all the stakeholders within one week and would be taken up in the next ECC meeting.