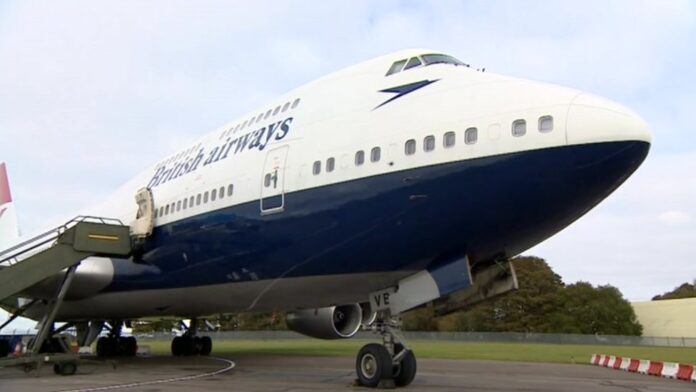 LONDON: One of the last 747 jumbos flown by British Airways has been saved from the scrapyard, and will be converted into a cinema, museum and conference centre from next spring.

The “Queen of the Sky” will now sit at Cotswold Airport, Gloucestershire, after hundreds of aviation enthusiasts watched it leave London for the last time on October 7. The exterior of the superjumbo will be maintained, but it will become a cinema, education centre and wedding venue.

The 25-year-old jet, registered G-CIVB, was delivered to the British flag carrier in February 1994.It has completed 13,398 flights, amounting to more than 118,445 hours in the skies and flying nearly 97 million kilometres. It completed its last flight from Miami to London Heathrow in April. Boeing announced it would stop making 747 aircraft in July, as airlines look for newer and more fuel-efficient planes.

British Airways planned to retire its fleet of jumbos in 2024, but brought it forward after the Covid-19 pandemic devastated the airline industry.

The first 747 took flight in February 1969. The original “jumbo jet” could carry 550 passengers – significantly more than its competitors. “It was with great sadness that we retired our two final 747s based at Heathrow, so we’re glad Cotswold Airport is able to give one of these aircraft a new home and a new lease of life,” said Sean Doyle, the new chief executive of British Airways.

But Suzannah Harvey, chief executive of Cotswold airport, said the move was “great news” for locals and visitors who wanted to see and experience the stalwart of the skies. “There is such a huge amount of interest in her as British Airways’ last commercially operated 747 and with the historic livery in which she is painted,” Harvey said.

“We’ve got a very good support network building already, which will help to maintain and preserve her for the future.” Aviation analysts believe that the old aircraft could be worth about $4.6 million. Although the aircraft are not being made any more, there is still value to be derived from the machine’s parts, such as engines and landing gear.