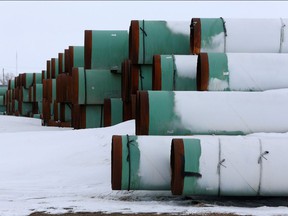 The move represents another set-back for the beleaguered Canadian oil industry, in particular its energy heartland Alberta, kills thousands of jobs, and marks an early bump in Biden’s relationship with Canada, a key trading partner.

Keystone XL, owned by TC Energy Corp, is already under construction in Canada, and would carry 830,000 barrels per day of Alberta oil sands crude to Nebraska.

But opposition from US landowners, Native American tribes, and environmentalists has delayed the project for the past 12 years and Biden had long pledged to scrap the permit.

“While we welcome the President’s commitment to fight climate change, we are disappointed but acknowledge the President’s decision to fulfill his election campaign promise on Keystone XL,” Canadian Prime Minister Justin Trudeau said in a statement.

Alberta Premier Jason Kenney, who earlier this week threatened legal action if Keystone XL was scrapped, said on Wednesday he was “deeply disturbed” by the move.

“This is a gut punch for the Canadian and Alberta economies. Sadly it is an insult directed at the United States’ most important ally and trading partner,” Kenney told a news conference.

Christy Goldfuss, an energy and environment policy expert at the liberal Center for American Progress in Washington said a major part of the Biden administration’s climate strategy is to avoid building new long-lasting oil and gas projects such as KXL.

“The more we invest in fossil fuel infrastructure, the harder it is to transition to the investments we need to make for clean energy,” said Goldfuss, who ran the Council on Environmental Quality in former President Barack Obama’s White House.

TC Energy, in a statement issued before the revocation, expressed disappointment with a move it said would overturn a regulatory process that had lasted more than a decade. Former Republican President Donald Trump revived the project, but it still faced ongoing legal challenges.

The Calgary-based company said it will suspend construction and warned there could be a “substantive” predominantly non-cash, after-tax charge to earnings in the first quarter of 2021. TC Energy said the decision would lead to layoffs for thousands of unionized construction workers.

TC Energy stock closed down 1.2% at C$55.92 in Toronto while the benchmark Canadian share index edged up 0.3%.

“This action is killing thousands of Canadian and American jobs at a time when both economies badly need private investment,” said Tim McMillan, chief executive of the Canadian Association of Petroleum Producers, adding it also wiped out equity investment in the pipeline by Canadian indigenous groups.

Canada, the world’s fourth-largest crude producer, ships most of that output to US refineries. In 2019, the US brought in 3.8 million bpd from Canada, more than half its daily imports of 6.8 million bpd.

Canadian producers, who have struggled for years from low prices partly related to sometimes-congested pipelines, have long supported KXL.

Producer Suncor Energy said it backed expanding market access to the United States through pipelines like KXL, which it argues would provide responsibly sourced oil to US refineries for the benefit of US consumers.

But a Canada Energy Regulator report in November said western Canadian crude exports are expected to remain below total pipeline capacity over the next 30 years if KXL and two other projects proceed, prompting environmental groups to question the need for all three.