When it rains it pours, on top of a supply chain disruption, pumps want to go on strike while people demand more fuel 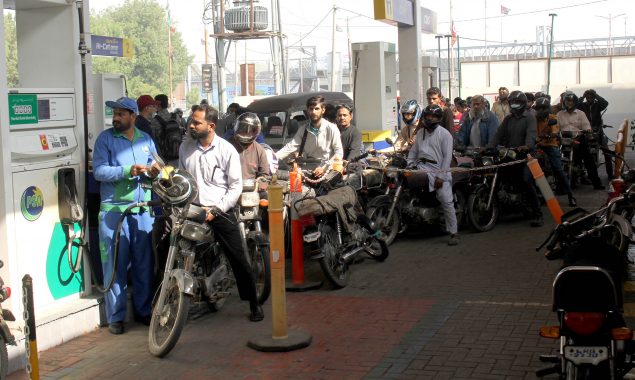 Pakistan Petroleum Dealer Association (PPDA) announced a nationwide strike on July 18, 2022, to demand the government increase the distributors’ commission. The association wants this commission increased from 3.5% to 6% as promised earlier by the government.

Banners have been hung across various petrol pumps with details of the strike and the association’s demands. PPDA cites rising minimum wage, rising electricity prices, and longer load-shedding hours leading to higher generator costs as the prime reasons for demanding more commission.

The decision to go on strike was made public the same day as Prime Minister Shehbaz Sharif’s announcement of the government’s decision to bring petrol prices down by PKR 18.50 per litre, and diesel prices down by PKR 40.5 per litre effective July 15. The PM said that any further decline in international oil prices will also be passed on to the public. Earlier before the announcement, Finance Minister Miftah Ismail in an earlier presser explained to the media that the IMF had no objections to the government’s move.

This implies that the dealers see an opening in getting the government to agree to their demands after seeing prices recede in international markets and domestically.

There are various components that help determine the price of fuel in the country. Dealership margins are the margins a dealer (a pump owner in this case) gets. These used to be in the form of percentages but have now been fixed per litre.

Back in November, the dealers went on a strike asking for revised margins.

In 2016, the Economic Coordination Committee (ECC) decided that margins will be revised annually by the amount of average Consumer Price Index (CPI). The period for this average changed in 2019, but the rule remained the same. Despite that, over the past five years, the margin was only revised four times for petrol and three times for diesel. There have been threats of strikes every time.

Before November 2022, a revision in margins took place in April 2021 which was after a delay of nine months for petrol. The government, over the past few months, has been delaying the revision stating that the PIDE study would be used as a gauge to revise margins. The study, however, is completed yet the government was still not keen to revise rates.

In addition, if you link this to the fuel shortage of June 2020, the government’s relationship with fuel pumps isn’t that great to begin with. While inflation remains a concern and with fuel prices rising internationally, the government feels compelled to make fuel pump owners wait.

How do pumps make money?

Petrol pumps can be company-owned or dealer-owned. Dealer-owned petrol pumps are where an individual buys a “franchise” of a petrol pump, follows all legal procedures, and sells fuel on behalf of an Oil Marketing Company (OMC). They earn through the dealership margin. Petrol pumps earn based on how much fuel they sell. Some pumps also earn on the sale of lubricants and services such as tire puncture stations, car washes, service areas, stores, and so on.

As per the Shell Pakistan website, “Your income will depend on the type and number of stations you run and their locations, but you can look forward to potential earnings of between PKR 2,500,000 and PKR 3,500,000 per annum from year one (for a single site), with the opportunity for additional earnings if you exceed targets and control your costs.”

While these figures are not guaranteed, if one chooses to open a fuel station, the company one signs with will provide the fuel and training. In return for investment and the time one puts in to run the fuel station, one will get their margin and possibly a bonus or remuneration for meeting sales targets. While fuel prices do add to the inflation of a country, it is important to note that inflation and the cost of doing business have also increased for pump owners.

Hindered supply regardless of the strike

However, regardless of the motive behind the strike, the petroleum supply is not too reliable. As per media reports, no oil tankers have been filled since July 10, 2022, and more than 6,000 oil tankers await filling at Keamari, Korangi, and Port Qasim. Following torrential rain in Karachi, rainwater is stagnant at oil installation areas in Karachi and oil terminals of 21 fuel importing companies.

As a result, fuel supply has been disrupted everywhere bringing the country close to a fuel crisis.

Moreover, following the decline in prices of fuel, bus and train fares have been reduced. Federal Minister for Railways and Aviation Khawaja Saad Rafique on Saturday announced a 10% cut in plane and train fares in a video message. Rafique said that the Ministry of Railways has decided to lower fares from 5% to 10% as a result of the recent drop in the cost of petroleum products.

Fares have been reduced on the economy class of Pakistan Railways express train, and both classes of all domestic flights of Pakistan International Airline (PIA) for the next 30 days.

Rafique said that after this the Civil Aviation Authority (CAA) would urge private airlines to reduce their fares. He is also hoping that local transporters will reduce their fares. What all this means is the demand for fuel is certainly going to rise. With the PPDA and supply disruption, one can only wonder what this will mean for Pakistan’s already fragile fuel-crisis-prone economy.