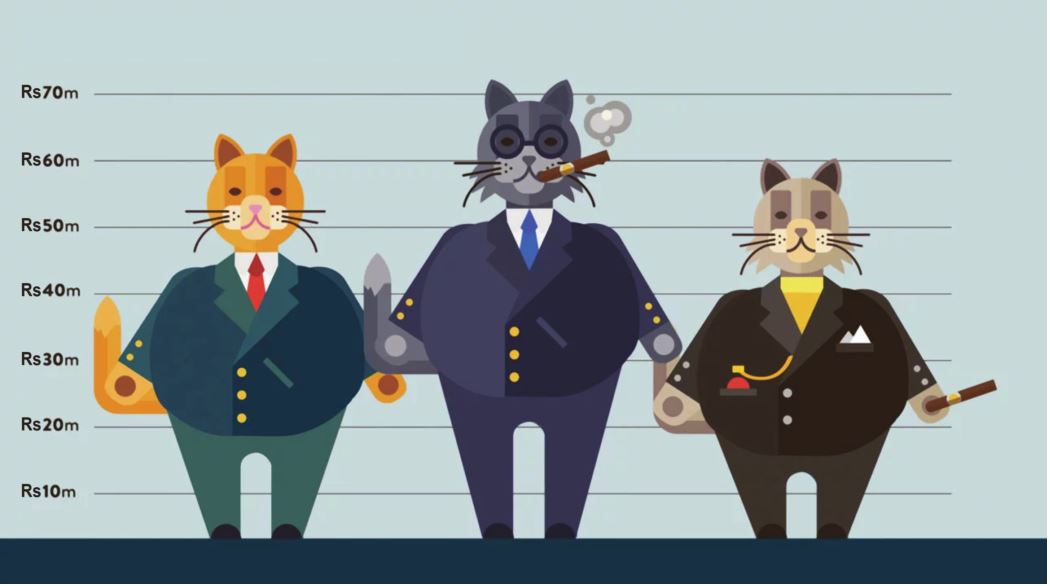 As the curtain coming down on 2017 coincided with his premature exit as CEO of Pakistan’s largest commercial bank, Habib Bank Limited, it may have dealt a pasting to Nauman K. Dar’s ego.

His pocketbook, though, didn’t feel the pinch a whit.

According to HBL’s detailed financial accounts for 2017 released last week, Dar raked in almost Rs345 million during his last year as CEO – a position he had held since 2012.

His total earnings in 2017 were about 27 percent higher than a year ago. In contrast, the share price of HBL lost nearly 40 percent value during the same period.

Net profit by HBL dropped to Rs7 billion in 2017, down 78 per cent from Rs31.8 billion a year ago, mainly due to an unprecedented penalty of Rs24 billion ($225 million) that a US regulator imposed on HBL for its noncompliance with risk management rules in New York.

Unconsolidated financial statements show Dar’s regular annual remuneration, including allowances, was Rs99.3 million in 2017, up 22 per cent from a year ago.

Separately, he received Rs30 million in 2017 as part of “certain long-term benefits”. He had received the same amount under this head in the preceding year as well.

Dar added another Rs45 million to his net worth through leave encashment as he retired on the last day of 2017.

But the highest amount he received under any head last year was the “short-term employee benefit scheme”. Consisting of cash and special bonuses, the scheme determines the award on the basis of an employee’s “evaluation and the bank’s performance during the year”.

All in all, the outgoing HBL CEO received Rs344.3 million as compensation in 2017 – a year in which the bank’s net assets shrank by Rs9.3 billion or 5 percent.

Increasingly under the scanner:

The issue of hefty CEO pay has increasingly gained public attention since the 2008 financial crisis. In Pakistan, the average annual remuneration of a bank CEO in 2016 – the latest year for which industry-wide data is available – was Rs77.2 million, a staggering 52.5 times the average salary of a banker in that year.

Yet ordinary shareholders seem to have no objection to this practice. Minutes of annual general meetings held by big commercial banks rarely show small shareholders hollering about ‘exorbitant’ CEO pay.

According to one stock analyst, shareholding in large banks is usually concentrated within sponsors and institutional investors. For example, local retail investors held only 3.4 per cent shares in HBL at the end of 2016. Majority stakeholders and large investors are not particularly bothered by the symbolism of a CEO’s fat salary, he said.

But the fact that the last HBL CEO walked away with leave encashment of Rs45 million besides long- and short-term benefits of Rs200 million at the end of a tumultuous year is still surprising.

Moreover, the SBP recommends that CEO bonuses should ‘diminish or disappear’ in the event of poor performance. “Subdued or negative financial performance of the institution should generally lead to a considerable contraction of the institution’s total variable compensation taking into account both current compensation and amounts previously earned and withheld under deferred pay arrangements,” the guidelines assert.

Speaking to Profit, Pakistan Institute of Corporate Governance (PICG) CEO Feroz Rizvi declined to comment about the remuneration of the last HBL CEO. However, he insisted that the board of directors of every corporate entity should ensure that its CEO is held responsible for any ‘fiasco’ that happened on his or her watch.

Share prices of five out of the six biggest commercial banks dropped in 2017, thanks to a low interest rate environment. Yet the remuneration of their CEOs, except that of Allied Bank Ltd (ABL), appears to have gone up in 2017.

A year-on-year comparison of CEO remuneration is difficult in the cases of National Bank of Pakistan (NBP), United Bank Ltd (UBL) and Bank Alfalah: each of these banks had more than one CEO in 2017.

For example, UBL saw a change of command in 2017 when Wajahat Husain resigned as CEO on May 31. Only the ‘severance cost’ of Husain was Rs51.36 million. His regular remuneration in 2016 was Rs144.1 million. He and his successor, Sima Kamil, drew annual remuneration of Rs216.23 million in 2017.

As many as three people served as NBP CEO in 2017, with their cumulative remuneration amounting to Rs59.59 million. In contrast, the single CEO during 2016 drew a compensation of Rs49.7 million.

As for Bank Alfalah, its latest annual report shows it made ex-gratia payments to outgoing executives – including Atif Bajwa who resigned as CEO in July 2017 – amounting to Rs694.47 million as opposed to nil in 2016.

It shows Bajwa and his successor, Nauman Ansari, received a remuneration of Rs119.47 million in 2017 compared to Rs101.6 million that the former received a year ago. Bank Alfalah was the only big-six entity whose share price increased (by 10.6 per cent) in 2017.

The remuneration of the MCB CEO increased 7 percent to Rs95.44 million in 2017 while its share price dropped 11.6 percent over the same 12 months.

The CEO of ABL received in 2017 a remuneration of Rs45 million, including Rs17 million in bonus. His total compensation was down 22.2 percent from a year ago, making ABL apparently the only big bank that cut its CEO’s remuneration in 2017.

“It’s difficult to say whether a CEO is drawing a high salary. It’s relative,” said Rizvi of PICG. “Bank CEOs also bear a heavier responsibility than the chief executive of any other corporate entity. They’re answerable to their shareholders as well as depositors. Complex roles, higher salaries,” he said.

‘US businessmen keen to invest in first CPEC economic zone’