Overall public debt at 70 per cent of GDP 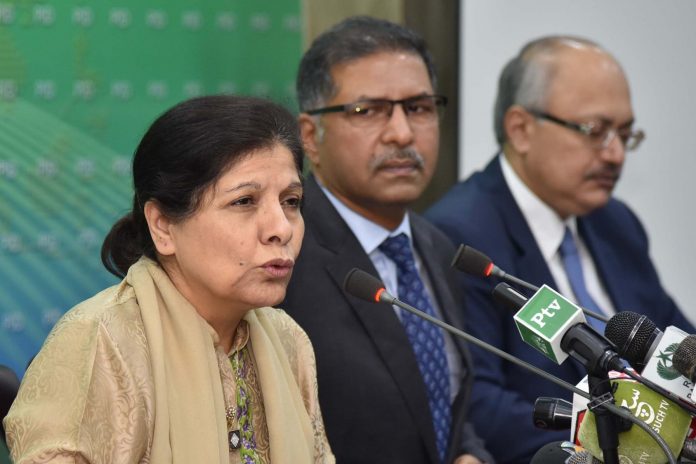 ISLAMABAD: While giving the clear picture of Pakistan’ economy, the Minister for Finance Shamshad Akhtar has said that Pakistan is running above the targets on financial matters.

Shamshad Akhtar said that the caretaker government like the outgoing government is facing three problems such as current account deficit, fiscal deficit and debt matter.

“We have a serious problem of current account deficit (CAD). The outgoing government had set CAD target $8.9 billion however it has surged to $14 billion which is 1.6 per cent of GDP,” she added.

In addition to this, she stated that the caretaker setup will fulfil the commitments regarding the balance of payment. This is a positive sign that exports are now increasing which have now been recorded at $20.6 billion whereas import was witnessed at $44.5 billion. She further stated that the trade deficit is $24.9 billion and that measures are being taken to reduce and contain it.

The minister for finance stated that Pakistan will miss the fiscal deficit target of 4.1 per cent as it has not yet reached 6.1 per cent growth target as set out by the outgoing government.

Shamshad Akhtar stated that the GDP will remain 5.8 per cent in this fiscal year as she stated that every sector has performed well, however, the increase in growth has not only been witnessed in demand but supply side as well because of foreign investment.

The finance minister stated that Pakistan needs long-term structural reforms as without such measures Pakistan cannot progress. The caretaker setup will give financial as well as other guidelines to the elected government, however, it depends on the incoming government to follow or not to follow, she added.

While replying to one question finance minister stated that we are carefully monitoring the reserve situation and government will fulfil the financial obligations.

Though the finance minister shared the worrisome situation of the economy in her first press conference after taking charge of the ministry, she also largely depended on the data provided by PMLN loyalist bureaucrats who are still sitting on the important posts.

Meanwhile, experts believe that she should have shared the true picture of the economy, challenges and a solid short-term plan out of the macroeconomic problems. They believe that she did not disclose the plan of meeting deficits, repayments of loans in near future in case the caretaker setup avoids a bailout package from IMF.

Finance Minister Dr Shamshad Akhtar said Pakistan’s macroeconomic situation was stable. She added that the growth rate was at 5.8 per cent, and inflation was under control. However, petroleum prices in the global market had surged from 5 per cent to 11 per cent which had adversely affected Pakistan.

Spelling out the reasons behind the recently extended hours of load-shedding, Barrister Zafar said power cuts were caused by electricity shortfall resulting from growing demand of power owing to hot weather.

He said there was an extreme shortage of water in dams, while, Port Qasim and Balloki power plants had also developed technical faults, which caused over 5000 MW reduction in power in the national grid.

He said water level in dams has increased after rain and the technical faults in the plants have been removed, and now the situation has considerably improved.

He said the country has a total installed capacity of 28,000 megawatts. Expressing the caretaker government’s commitment for transparent elections, he assured that they will fully support the Election Commission of Pakistan to hold free, fair and peaceful elections.

He categorically stated that the caretaker government will make no compromise on the security of the country.