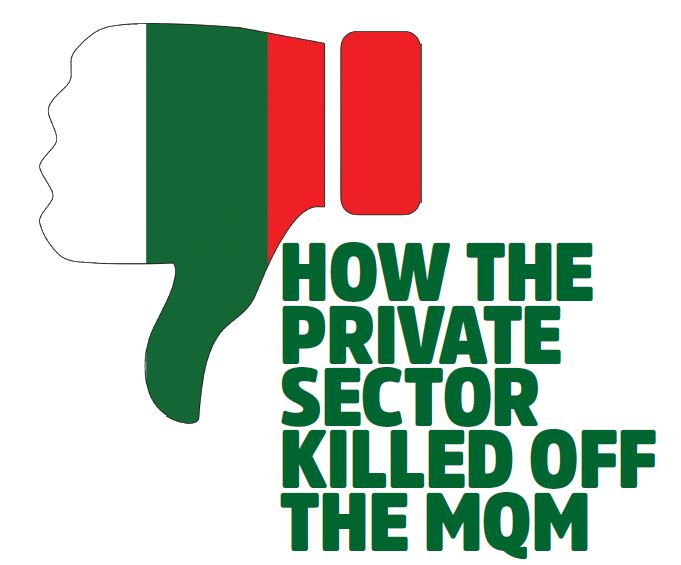 If there is one thing that became abundantly clear in the 2018 elections, it is that the Muttahida Qaumi Movement (MQM) is well and truly dead. Why is a business magazine talking about the death of a political party, you might ask? Because the death was caused primarily by economic factors.

While it is true that many elements of the Establishment certainly seemed gleeful at the prospect of the MQM’s death and appeared to do everything within their power to hasten the demise of the party that claims to represent the interests of Muhajirs in Pakistan, they were by no means its primary undertakers.

To put it simply, the MQM is dying because it has no reason to live anymore. And while some of its supporters still cling on to its slogans as comfortable relics of the past, the MQM cannot escape reality: Muhajirs are not a threatened ethnic group in Pakistan and a party that sustains itself on stoking a sense of fear within that ethnic group will strangle itself to death.

To understand why the MQM is dying, you do not need to watch Altaf Hussain’s speeches, nor do you need to learn about the Army operation in Karachi, and most certainly don’t listen to the know-nothing talking heads on television. You do not even need to talk to Muhajirs about their political views. All you need to do is stand on the sidewalk on I.I. Chundrigar Road in Karachi at 9 am on a weekday morning. Stand in front of any building and ask the young men and women going into those buildings just two questions: how much money do you make, and how much money do your parents make?

While you will meet many sons and daughters of comfortably middle-class families, you will also meet the 24-year-old commercial banker at Bank Alfalah, making Rs40,000 a month, whose father is a rickshaw driver scraping by on Rs15,000 a month. You will meet a young accountant at PricewaterhouseCoopers whose parents own a fruit cart and barely make it above the poverty line. And you will meet the young lawyer whose father owns a small paan shop on a street corner in one of the many working-class neighbourhoods of the city.

These young men and women have one thing in common: they have managed to secure a ticket out of their working-class background into Pakistan’s rising and increasingly affluent middle class, and they did not need a government job to do so. Some, maybe even most, did not even need a government-subsidised education to get there either.

Why is this relevant to the MQM’s imminent death? Because the fundamental premise that justified MQM’s existence in the first place was the notion that Muhajirs were being prevented from gaining access to economic opportunities by virtue of their ethnicity.

Muhajir resentment emerged in the early 1970s when, after two decades of dominating the Civil Service of Pakistan, they were finally forced to make room for people from other ethnic groups in the country through the introduction of geographic quotas for government jobs. Of course, Muhajirs did not see it as an injustice being corrected: they had been raised to view other ethnic groups as unworthy cretins and saw this policy measure as the death of meritocracy.

Built on half-truths and lies though it was, that culture of resentment at least held some credence when the government was the dominant economic actor and the only paths to upward economic mobility relied on access to political patronage and a government job for yourself or for one of your family members. But as the economy liberalized in the early 1990s onwards, there is now no longer just one path to the Pakistani upper middle class: there are many, and many of them are controlled by Muhajirs themselves.

The government no longer controls access to economic opportunity through patronage, and so the democratic order no longer threatens Muhajir economic interests. It did when they relied on the disproportionate power in the civilian bureaucracy that was only possible through undemocratic control. The geographic quotas remain, but Altaf Hussain’s successors at the University of Karachi either no longer care, or are no longer threatened by them. Even if you want a government job as a Muhajir, there are now so few people applying from Urban Sindh that the quotas perversely begin to work in your favour.

Under the Musharraf Administration, it had briefly felt possible that the MQM could make the pivot from being the insurgents to being the responsible governing party. Then came the politically brilliant PPP ploy in 2011 of using Zulfiqar Mirza to make the MQM go back on the ethnic defensive, and all of a sudden the MQM’s evolution stood aborted. The party reverted to being the well-organised gang of thugs it always was.

Some observers, such as Zarrar Khuhro in the Herald, argue that the MQM needs to find a post-Altaf Hussain strategy to survive. While Khuhro’s analysis of the break-down of the MQM is very well laid out, I argue that no viable recovery strategy exists.

The 2018 elections showed that Muhajirs have reverted to their pre-1988 voting patterns of voting for national parties and in the Pakistan Tehrik-e-Insaf (PTI), many of them have found one they can accept. Indeed, the leadership of the PTI on economic matters appears to be largely from Karachi, and includes the first generation of professionals who made solid middle class careers in Corporate Pakistan, and not through government.

Meanwhile, for the first time in Pakistan’s history, its financial capital will be represented by a political party that is also in power at the federal level, which may bode well for both economic policymaking and ethnic harmony in the nation’s largest and wealthiest city.