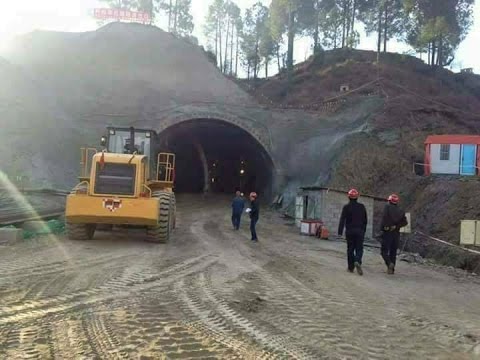 MANSEHRA: The construction work of Karakorum Highway (KKH) Phase-II, also known as Havelian-Thakot Expressway, is in full swing as the project contractor, China Communications Construction Company (CCCC), has attained 55 percent completion stage within about two years since the project’s launch.

Passing through the famed Karakoram range, at an elevation of 4,714 metres – one of the highest paved roads in the world, the KKH connects the provinces of Punjab, Khyber Pakhtunkhwa and Gilgit-Baltistan with China’s Xinjiang Uyghur Autonomous Region.

A popular tourist attraction through its length, due to its elevation and extreme conditions for construction, it is often referred to as the Eighth Wonder of the World. A part of the Asian Highway AH4, the highway is also called Pakistan-China Friendship Road. Around 810 Pakistani nationals and 200 Chinese had sacrificed their lives when the KKH was initially developed back in the 1960s.

As the saying goes, “Roads and highways act as the arteries of the economy through which the economic networks grow. By linking producers to markets, workers to jobs, students to school, and the sick to hospitals, roads are vital to any development agenda,” the inhabitants of Hazara division are major beneficiaries of the new expressway, cutting travel time significantly, bringing new employment and business opportunities of and linking it with a network of roads.

A lynchpin in connecting the Gwadar Port with the Chinese border town Kashgar, the KKH Phase-II is one among dozens of early harvest projects of the game-changing China-Pakistan Economic Corridor (CPEC) located in Khyber Pakhtunkhwa.

The National Highway Authority (NHA) had awarded the construction contract of Havelian-Thakot section to the CCCC, with Pakistan federal Ministry of Communication being the supervising agency. The Chinese government for its part provided the concessional loan for executing the project. Construction work commenced on the project in September, 2016 while the completion date is March 2020.

A visit to the project site has revealed that the contractor, CCCC, is vigorously pursuing the construction work on the 120-kilometer-long project worth US$1.3 billion and involving a huge Chinese and Pakistani skilled and unskilled workforce. The project involves 40-kilometer-long four-lane Expressway and 80-kilometer-long two-lane Highway which would reduce four hours travel time from Havelian to Thakot.

Most of the project area is located in the middle and low mountainous terrain. The route mainly passes through micro-geomorphic units such as ridges, mountain valleys, platforms and mountain slopes. The terrain is jagged and most of the gully is ‘V’ type. The rivers passing through are mostly ‘U’ gully while slopes on both sides is steep while the platform are relatively higher, making the project a complex job.

Fractured development and broken strata suggest that there have been a number of geological disasters.

According to the CCCC, the KKH-II is a comprehensive, largescale project with high grade, high specification and has high socio-political significance for the subsequent development of the Karakorum Highway.

The project was signed as a part of the negotiation framework between the governments of China and Pakistan and China Communications Construction Company Limited was commissioned to execute the project.

Out of the six tunnels which are 10.3 kilometers long, two tunnels have already been completed and opened for public traveling.  Out of the six tunnels, two are to be built in Expressway section while four tunnels are in Class-II Highway. Two service areas are also being developed besides three tunnel management stations.

The project involves eleven flyovers and six toll stations, including three ramp toll stations and as many mainline stations. The first toll plaza is at Havelian while the others are at Abbottabad and Mansehra. The NHA would decide the mode and rate of revenue at these toll plazas.

Manager of Section A of the Project, Mr Zhu Jiangfan, told Pakistan Today that over 200 mountains in one of the most rugged terrain have been chopped to build the highway and flyovers. He said that over 7,000 Pakistani labourers have been employed by the CCG besides necessary Chinese workers.

Ma Wei, manager of Section B, said that the company would guarantee 50 years age of highway and 100 years for tunnels. He said that the company strictly adhered to corporate social responsibility (CSR) guidelines. The CCCC, he said, was also extensively involved with tree plantation drive to help ensure environmental balance to avoid deforestation in the area.

To avoid accidents, the expressway would be fenced on both sides while smaller businesses would be encouraged on either side of the highway. There would be three interchanges on the expressway to help facilitate the local travelers use the expressway. The highway has four sections divided into A, B, C and D sections.

Locals at the project site were upbeat about the prospects of the project, which had turned their lives around. Talking to Pakistan Today, Abrar Shaikh said that due to the construction of the highway, the land prices had increased manifold and new business and employment opportunities had come about.

“This highway is like a dream come true for the locals. In the past, there were no jobs or businesses, and our youth had to go to Islamabad, Lahore or Karachi to seek employment. The Chinese companies have brought us jobs and small businesses. Now people from other areas are coming to our villages and Mansehra has become a hub of business and employment,” he said.

Abrar Shaikh added that the land prices had soared and people from far-off places were interested in lands on both sides of the highway.

Ahmed Khan, a semi-skilled labourer at the project site said, that he had been working with the contractors since past six months and making a decent earning.

He dubbed the project ‘as a good omen for the locals’ who were benefiting from job-creation besides other interlinked businesses. He said that he was happy to know that the Chinese brothers were serving the people of his area to help improve the living of the people of hitherto ignored areas of KP.