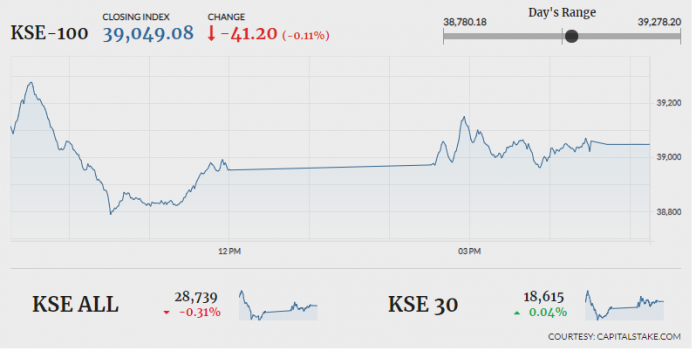 KARACHI: Failing to end the last session of the week positive, Pakistan Stock Exchange (PSX) was once again conquered by bears, as indices kept shedding gains all day long despite a slight improvement in the volumes.

The foreign exchange reserves held by central bank declined by 3.28pc on a weekly basis and now stand at $7.05 billion, according to the State Bank of Pakistan.

Moreover, remittances sent home by overseas Pakistanis were recorded at $1.69 billion (down by almost 2pc) in December 2018, as compared to $1.72 billion received in the same last year.

The trade deficit of Pakistan, which previously stood at $17.7 billion in July-December 2017, contracted by 5pc to $16.8 billion.

Among other developments that impacted the market, Moody’s Investors Service said that Pakistan would have to repay foreign debt amounting to 160pc of its foreign currency reserves in 2019.

The auto sales recorded a growth of 11pc on a month-on-month basis in December 2018 for the first time in the last 12 years, according to Pakistan Automotive Manufacturers Association (PAMA). On yearly basis, car sales increased by 1pc to 19,423 units.

ISLAMABAD: The Economic Coordination Committee (ECC) of the Cabinet has constituted a four-member committee to review the margins of oil marketing companies/dealers on petroleum...
Read more
FINANCE

LONDON: The founder of collapsed Dubai-based private equity company Abraaj Group will be extradited to the United States, where he is wanted on fraud...
Read more
HEADLINES

The Azerbaijan Export and Investment Promotion Foundation (AZPROMO) is exploring the Pakistani market to support the export of Azerbaijani products. This was announced by AZPROMO...
Read more
- Advertisment -

January 28, 2021
LONDON: The founder of collapsed Dubai-based private equity company Abraaj Group will be extradited to the United States, where he is wanted on fraud...