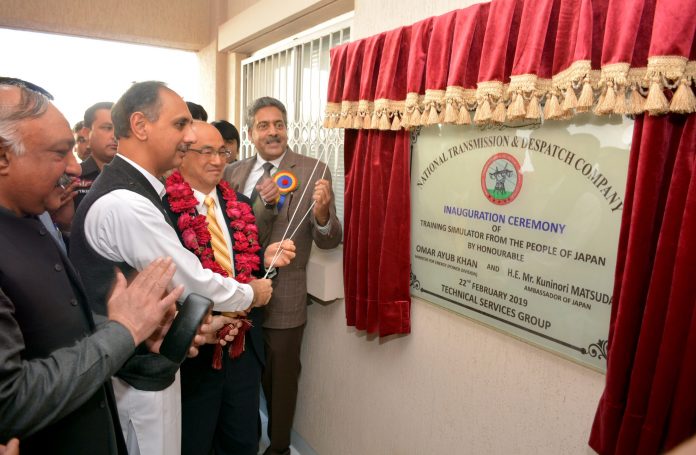 The project has been completed with a cost of Rs1 billion and with the cooperation of Japan International Cooperation Agency (JICA). Power Division Secretary Irfan Ali, NTDC managing director and JICA representatives were also present on the occasion.

Omar Ayub Khan thanked the Japanese government and JICA for extending their gracious support for the installation of the training simulator. He said that the simulator would help enhance the vision of young engineers of NTDC and distribution companies.

He said that he, along with the Power Division team, is striving very hard to eliminate the constraints of the power sector with improvement in transmission, distribution and generation system.

The minister said that he has been personally paying surprise visits to various distribution companies in Sindh, Khyber Pakhtunkhwa and Punjab in order to improve the sector, adding that the present government believes in transparency, hence, it is receiving foreign direct investment (FDI) from various countries including Saudi Arabia, which has shown a keen interest to invest in Pakistan’s power sector.

“Security lines of energy would be controlled and Pakistan would not be dependent on other countries,” he affirmed.

The minister said that the power infrastructure transmission lines and distribution system would be upgraded with an investment of $55 billion.

Comparing power pilferage and losses of the distribution system during the month of Jan 2018 and Jan 2019, he said that power theft losses have been reduced to 5.6pc and managed to save Rs10 billion.

He appreciated the efforts of the CEOs of distribution companies with regard to eliminating power pilferage and improving the recoveries.

In his remarks, Power Division Sectary Irfan Ali sought assistance from Japan to upgrade the distribution system of DISCOs.

He said that the state-of-the-art facility would provide training opportunities to the employees of NTDC and other distribution companies of the power sector, adding that training on the simulator would bring improvements in the operation and maintenance of grid stations.

Deputy Chief of Mission Yusuke Shindo applauded the hospitality extended by Ministry of Energy (Power Division) and NTDC. He vowed to extend financial assistance to Pakistan in the coming years as well.

TSG NTDC General Manager Dr Rana Abdul Jabbar said that so far, over 100 engineers and staff members have been trained through this training simulator, which resulted in considerable reduction in fatal and non-fatal accidents while working on grid stations and transmission lines. A large number of NTDC engineers were also present on the occasion.