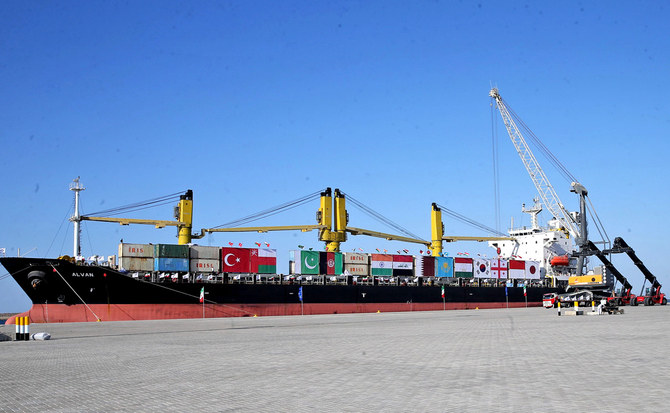 NEW DELHI: India expects to start full-scale operations at Iran’s Chabahar general cargo port it has built by the end of May, the country’s shipping minister said in a boost for regional trade.

India has been developing a part of the port on Iran’s south-eastern coast along the Gulf of Oman as a way to transport goods to Iran, but also Afghanistan and central Asian countries, and avoiding rival Pakistan.

But US sanctions on Iran slowed down the port’s development and Indian officials are now counting on a thaw in relations between Washington and Tehran under President Joe Biden to move forward with near $500 million of investments.

“I am expecting to visit Iran in April or May for the inauguration of full operations,” Mansukh Mandaviya, India’s ports and shipping minister, said.

India is developing two terminals at the port including the Shahid Beheshti complex and under an agreement signed with the Iran, it would run the terminal for 10 years.

Mandaviya said the port had already commenced operations in a limited way and the growth potential was evident.

Chabahar port had handled 123 vessels and 1.8 million tonnes of bulk and general cargoes from February 2019 to January 2021, he said.

“This is much higher than our expectations. Imagine the scale of operations and freight saving once it is fully operational,” he said.

Last year amid the pandemic, India used the Chabahar port to send 75,000 tonnes of wheat as humanitarian assistance to Afghanistan and 25 tonnes of the pesticide malathion to Iran to deal with a locust invasion.

The second batch of 25 tonnes has recently reached Chabahar.

As part of the agreement with Iran, India would provide six cranes and other equipment worth $85 million to equip and operationailse the Shahid Beheshti terminal.

So far, India has supplied two of these Mobile Harbour Cranes (MHC) and four others will be delivered over the next few weeks.

“Chabahar Port has emerged as the connecting point for the region to deliver humanitarian assistance during the Covid pandemic,” Mandaviya said.

India also plans to set up an around 600 km railway line from Chabahar port to Zahedan, the provincial capital of Sistan-Baluchestan in Iran close to the Afghan border, at a cost of $1.6 billion to facilitate the movement of goods to Afghanistan.

New Delhi has also proposed inclusion of Chabahar port in the International North-South Transport Corridor (INSTC)- connecting Mumbai with Moscow, the minister said, referring to discussions at a virtual summit on Chabahar port on Thursday.

The INSTC project, proposed by India, Russia and Iran in 2000, and later supported by 10 other central Asian countries, envisions a 7,200 km-long multi-mode network of ship, rail and road for freight transport, aiming to cut carriage costs by about 30pc and transit time from 40 days to about 20 days.

Nike to clean up used, returned sneakers and put them back on shelves

CHICAGO: Nike Inc said on Monday it will start refurbishing sneakers - from Vapormaxes to Reacts - returned by shoppers and selling them at...
Read more
World Business News

BEIJING/HONG KONG: China’s competition watchdog is adding staff and other resources as it ramps up efforts to crack down on anti-competitive behaviour, especially among...
Read more
- Advertisement -

April 12, 2021
Remittances from Pakistani workers employed abroad exceeded $2 billion for the 10th consecutive month in March at $2.7 billion — up 43 per cent...