Pakistani automobile assemblers are announcing delay in deliveries, but this time for no fault of their own 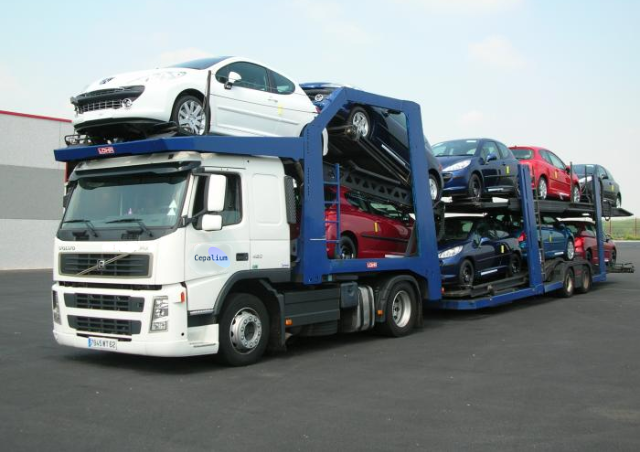 One of the most familiar sights on Pakistani roads over the course of the past few years has been the Kia Sportage. The success of the car has been astounding, and the formula behind it has been simple – Kia offered the public an SUV style car at the price of a top range sedan. You see, in Pakistan, for decades there has been a tense hold of the ‘Big Three’ companies (Suzuki, Honda, and Toyota) over the automobile industry. Suzuki would produce hatchbacks while Toyota and Honda would duke it out in the sedan category with the Honda City, Honda Civic, and the Toyota Corolla.

The Pakistani market has always been resistant to change, and this triopoly might have continued unabated if it had not been for Pakistais getting used to the comfort of refurbished Japanese cars. While that business has slowly gone to its inglorious death, it has opened up a chance for companies like Kia (which is South Korean) to come in and stake a claim in Pakistan’s car market. And while their Sportage has been the biggest success story, other cars and companies have also laid a claim. The Kia Picanto has done well in the hatchback category and Hyundai’s Tuscon has seen favourable response in the SUV segment.

The problem, however, is that the influx of these cars on the roads might just be set to see a drop, and not because these companies have done anything wrong, but because globally there is a shortage for a car part called the semiconductor, which provide power for battery management, in-car entertainment, driver assistance systems, and much more. These little devices that otherwise get no attention are behind everything from connectivity platforms to mapping applications, graphics processing systems, and advanced driver warning systems.

The world is still reeling from the effects of Covid-19 pandemic but the post-pandemic new normal has upended the global automotive industry way too quickly. A bane has surged for the global automobile industry after the pandemic  in the form of shortage of chips that has led to a cut in production of automobiles at all leading manufacturers. From Ford to Volkswagen to Honda, and Hyundai.

In Pakistan, Hyundai Nishat Motors is the first one to feel the heat of the chip shortage. The company has announced that it will not be delivering orders for its Tucson variant for September, 2021, owing to the disruption in the supply of semiconductor chips that are critical in the production of these cars. 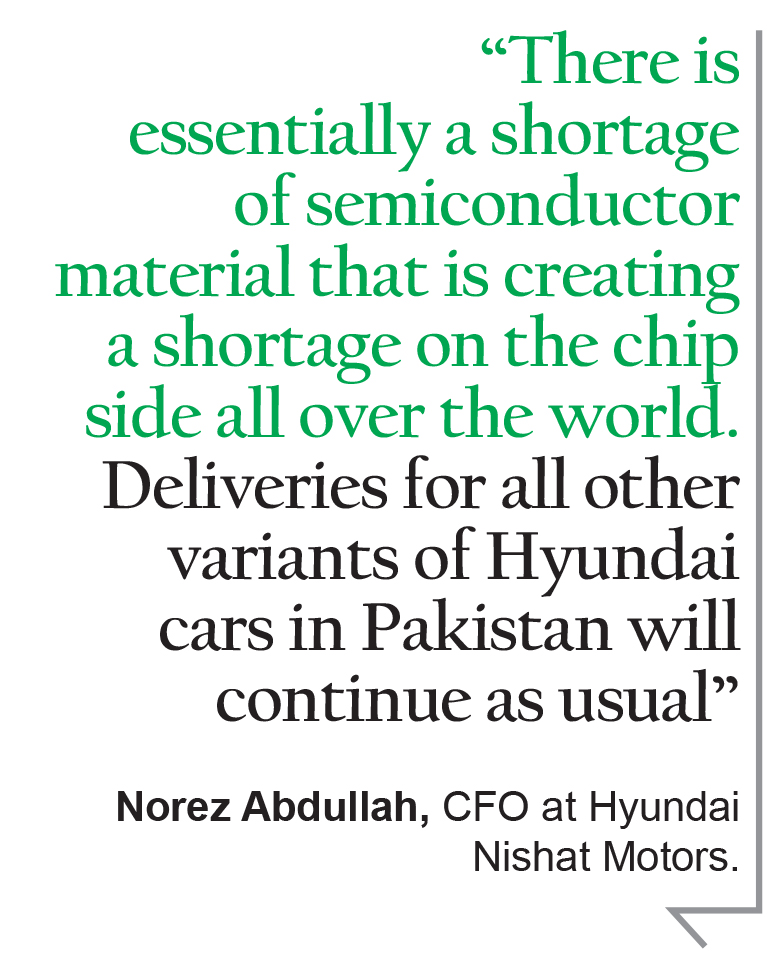 Tucson is a compact crossover SUV produced by South Korean automobile manufacturer Hyundai. In Pakistan, it was launched by Hyundai Nishat in August last year. The company has thus far sold 2,800 units of the SUV since its launch, till March 2021.

“Deliveries for all other variants of Hyundai cars in Pakistan will continue as usual,” says Norez Abdullah, CFO at Hyundai Nishat Motors.

While Hyundai Nishat is the first one to stop deliveries, others are expected to follow. Kia has already told Profit that delivery for their flagship Sportage and Picanto are both being impacted by the global shortage. Essentially, all the car companies that receive car parts from abroad and only assemble those in Pakistan, are facing a similar shortage and are most likely assessing the stock of each and every model of their car, and deliberating a similar decision of stopping deliveries as Hyundai Nishat and Kia. It is only a matter of time when that happens for the rest of the companies as well.

If we go back to the time when pandemic lockdowns started, global automobile manufacturers halted production because of the decrease in demand. And because the production had decreased, orders for chips from these automobile manufacturers had also fallen. Hyundai Motors in South Korea had been one of the shrewd ones to keep a healthy stock of these chips and even accelerated chip purchases.

However, last month, even Hyundai announced suspending production at its plant in Ulsan, South Korea, because of shortage of semiconductor chips.

“There is essentially a shortage of semiconductor material that is creating a shortage on the chip side all over the world,” says Norez.

“Post Covid, though factories started production, the demand for high-tech electric goods witnessed a surge and the semiconductor chip supply diverted towards those goods,” says Norez.

Automobiles are not the industry where these chips are used. In fact, automobiles are the smallest purchasers of these chips. From the numbers of TSMC for the fourth quarter of 2020, smartphones formed 51% of the revenue from chip sales, followed by PCs and servers at 31%. Automotives on the other hand formed only 3% of the total sales of the company.

The shortage of chips has led to shutdowns and production suspension not only at Hyundai but almost with all the leading manufacturers. For instance, Honda had shutdowns at its plants in the UK and Japan, followed by weeks of production cuts at these plants. Similarly, Toyota had a three week shutdown at  its plant in Texas, US, followed by eight weeks of reduced production.

Likewise, Tesla in the US had a two week shutdown of its California plant in the aftermath of shutting down a major semiconductor chip foundry in Texas. Volkswagen, Ford, General Motors, Audi, almost all have had times recently where these companies had to shut down plants, had to reduce production, or did both, all induced by the shortage of semiconductor chips.

The case of Hyundai

The CFO explained that Hyundai has an exponential use of semiconductor chips in smart accessories of its cars. Secondly, there was a catastrophic fire at a major chip vendor in Japan, called Renesas, that led to a major disruption in supply of chips for global automakers including Hyundai.

“In the West, there was a cold snap in Texas in late winters and a foundry was shut down that led to major supply disruptions. All of this has formed a perfect storm to spur a major disruption in the industry causing production cuts to total shutdowns at auto plants across the globe,” adds Norez.

When it comes to Hyundai’s Tucson SUV in Pakistan, the parent company in Korea supplies the Pakistani entity knock-down kits comprising hundreds of car parts that are then assembled here in Pakistan. The chips are pre-installed in the kits coming from Korea. And now because there is a chip shortage, these kits are not coming anymore and hence the halting of deliveries.

“It is due to the uncertainty around these chips and subsequently the kits from Hyundai Korea, we are not entertaining further bookings from September. Right now, whatever we have allocated until August, we will honour and deliver that,” says Norez.

“We don’t have reason to believe that we will not be able to deliver August allocation on time for Tucson. For other models, we will keep on taking the bookings and we will keep on delivering on time,” adds Norez.

The situation is precarious for the global auto industry. Following the Renesas fire, shares of Honda, Toyota, Nissan and other Japanese carmakers took a hit. Renesas has around 30% share in the global market of semiconductor chips.

“All the auto manufacturers; Ford, General Motors, Mazda, Tesla, have had late deliveries of different models because of the chip shortage,” says Norez.

The company, Hyundai Nishat Motors, is hopeful of resuming deliveries for Tucson as soon as they have some certainty and visibility about the chip stocks. Until then, deliveries for the SUV will remain suspended from September “until further notice”.

“This is a global issue whereby there are supply constraints for semi conductors. However it is expected to improve in our case. It’s not that extreme that the production has to be shut completely however our demands for semiconductors are not fully met,” says Muhammad Faisal , Chief Operating Officer at Kia Lucky Motors.

He adds that the company is in contact with customers and has explained the situation to them. However, the delay in deliveries is not across all car models. For instance, the deliverties of Kia Sportage have been impacted, however, Picanto deliveries have been delayed. “‘There are delays in certain vehicles which we are communicating with our customers. Picanto has been delayed, while there is also impact on Sportage.”

Despite that, there is light at the end of the tunnel and Faisal seems optimistic about a resumption in semiconductor supply.  Faisal says, “We’re trying to arrange adequate supplies and expect the situation to be better in May/ June.”

What about the others?

Profit has reached out to Indus Motor Company, Suzuki, Faw, Changan, and Al Haj/ Proton regarding the impact of the shortage on their production capabilities. Responses have not been received until the printing of this story. However, it can be said that a global shortage is likely to impact car deliveries across all automobile manufacturers in Pakistan, just like the rest of the world.