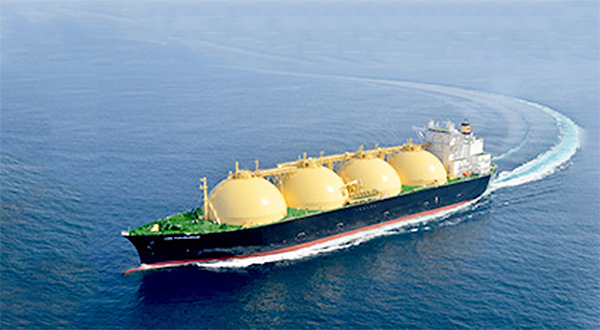 LAUNCESTON: The world’s top buyers of liquefied natural gas (LNG) are ramping up imports of the fuel in November, with the major consumers in Asia drawing more cargoes than gas-starved Europe.

Asia’s big three buyers – China, Japan and South Korea – are forecast to discharge 17.77 million tonnes of the super-chilled fuel in November, according to data compiled by commodity consultants Kpler.

This is up from 15.41 million tonnes in October, and will be the highest monthly total for the world’s top three buyers since February, when 19.01 million tonnes were discharged.

If there is strong demand from the three major northeast Asian countries, however, the same cannot be said for buyers in South Asia, where imports have slumped amid record high spot prices.

Pakistan’s November imports are forecast to be just 700,000 tonnes, down from 730,000 in October and the lowest monthly total since June. Bangladesh is expected to land 360,000 tonnes in November, down from October’s 530,000 tonnes.

The weakness in South Asia stands in contrast to the major countries in the northeast of the region, with China forecast to import 7.37 million tonnes in November, up from 6.19 million in October and the most since January.

As an aside, Australia remains China’s top LNG supplier despite tensions between Beijing and Canberra that have led to China imposing informal import bans and tariffs on a variety of Australian commodities, including coal, barley and lobsters.

China is expected to import 2.99 million tonnes of Australian LNG in November, the most since May and representing a share of just over 40% of the total.

Japan, at risk of losing the number one spot among LNG importers to China, is slated to land 6.04 million tonnes in November, up from 5.19 million in October, although down slightly from 6.3 million in November last year.

South Korea, the world’s number three buyer, is forecast to import 4.36 million tonnes in November, up from 4.07 million in October and above the 3.86 million from November last year.

Overall, the picture emerging from the big three Asian buyers is one of solid demand ahead of the northern winter, but not yet reaching the peak of demand seen the previous winter, when colder-than-usual weather led to a squeeze on supplies.

It’s also clear that the surge in spot prices has curtailed demand in South Asian, with India, Pakistan and Bangladesh traditionally more exposed to the spot market.

The weekly index for LNG for delivery to north Asia rose to $36.70 per million British thermal units (mmBtu) in the seven days to Nov. 19, from $31.50 previously.

Europe is still battling to secure enough natural gas for the upcoming winter, with pipeline supplies from Russia still inadequate, and the region’s inventories are below the five-year average for this time of year.

Despite the potential shortage of natural gas over winter, Europe’s LNG imports haven’t surged, and November’s arrivals are expected to be lower than those for October.

Europe will import 5.99 million tonnes of LNG in November, down from October’s 6.03 million, although ahead of the 4.82 million from November last year, according to Kpler data.

Refinitiv pegs Europe’s total LNG imports for November at 7.23 million tonnes in November, down from October’s 7.28 million but above the 6.20 million from November last year.

The import figures do show Europe is buying more LNG than it did at this time last year. But given that 2020 was affected by the coronavirus pandemic, it may be better to look at imports from November 2019, which were 8.56 million tonnes, according to Refinitiv.