All you wanted to know about submarine cables. Spoiler alert: sharks are not dining on them 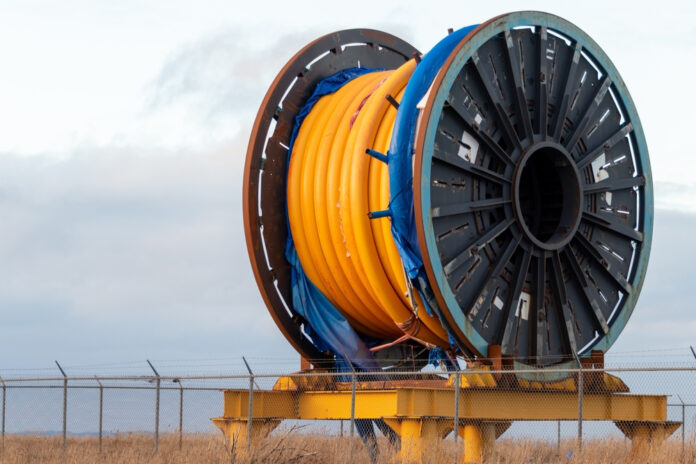 If nothing else, the internet has grown in Pakistan – in terms of both penetration, technology and of course the country’s reliance on it.

At the start of this century, Pakistan only had a bandwidth capacity of 155 megabits per second (mbps). Today’s capacity, in the face of increased demand, is 3 terabits per second (tbps). The total user base of broadband internet comprises 117 million users, as per Pakistan Telecommunication Authority (PTA).

That’s a huge increase. There was also a change in the technology.

In the beginning, satellites were the backbone of telecommunication in Pakistan. However, as the world shifted to fibre connectivity, due to its ability to process greater volume of data at a faster rate, Pakistan also commissioned its first underwater fibre cable in 1986, and by the end of 1990s it was the primary source of internet connectivity.

Pakistan envisions becoming a digital economy. But to achieve this, the country has to simplify access and digital connectivity reducing the coverage gap. There are 193 million mobile users in the country yet almost 50 percent don’t have a broadband connection.

“The reasons for this (lagging behind in connectivity) range from cost to socio-economic factors; we need to tackle those systematically. Additionally, while we are approaching 90 million unique subscribers, some basic hurdles need to be removed for the remaining Pakistanis. Handset prices need to be curtailed, while the government continues to explore ways to both reduce the tax burden on imports and drive local production. The right incentives across the board will be required to achieve this,” wrote Tania Aidrus, in her foreword for GSMA’s publication, Pakistan: progressing towards a fully fledged digital economy.

Therefore, it is extremely important to have a solid infrastructure that can support the growth of the internet user base but is also robust enough to be operational throughout the year.

Underwater submarine fibre cables are laid around the globe serving as the foundation of connectivity. Pakistan is a part of this extended network and is connected to the world through six submarine cables. Four of them are owned by PTCL (see graphic below) and two by Transworld.

Constant disruptions to the network can seriously halt the progress that a country makes on the digital front. As per a report by Deloitte published in 2016, The economic impact of disruptions to Internet connectivity, “In a low connectivity country, with a GDP per capita of $6,000, a population of 40 million people, and fixed broadband penetration of 5%, a temporary Internet shutdown could have an estimated GDP impact of $3 million per day of disruption.” The GDP per capita for Pakistan is well below the $6,000 (around $1200) yet the economic impact is still likely to be significant given the gradual shift to the digital economy.

Before diving deep (no pun intended) into the process, let’s get familiar with the components that enable this system to work. The overall network can be divided into six parts; Cable Landing Station, Cable Landing Point, Land Cable, Beach Manhole, Submarine Cable, Repeaters, Branching Units.

The first component is the cable landing station where the cables are connected to the backhaul systems or in simple terms, the station forms a connecting point between countries’ internet infrastructure and the cable network.

The cable landing point, as the name suggests, is the place where the submarine cable makes a landfall and after that it is connected to a land cable that extends to the aforementioned cable landing stations. For instance, one of Pakistan’s submarine cables that lands at the Karachi Seaview connects to the land cables at a point near the beach, identified by a small manhole.

Two important components of the cable itself are branching units and repeaters. The branching units allow the cable to split and serve more than one destination. The repeaters are basically devices attached with the sea cable to amplify its signal. The power into the repeaters is supplied from the power station at the cable landing stations. For the cables to be deployed in the sea, a special cable laying vessel is used that unwinds the cable onto the seabed and buries it a few metres below the surface with the help of a shaft. 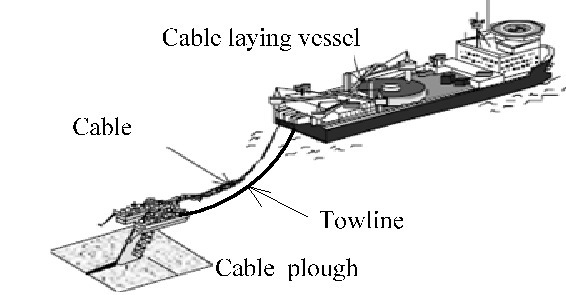 Submarines, sharks and your internet connection

The process and infrastructure of submarine cables is not covered in the mainstream media as much. However, what gets a lot of eyeballs is when there are any faults in this complex cable system. In the past three years, PTCL alone has faced 19 cable faults on its four underwater cables. 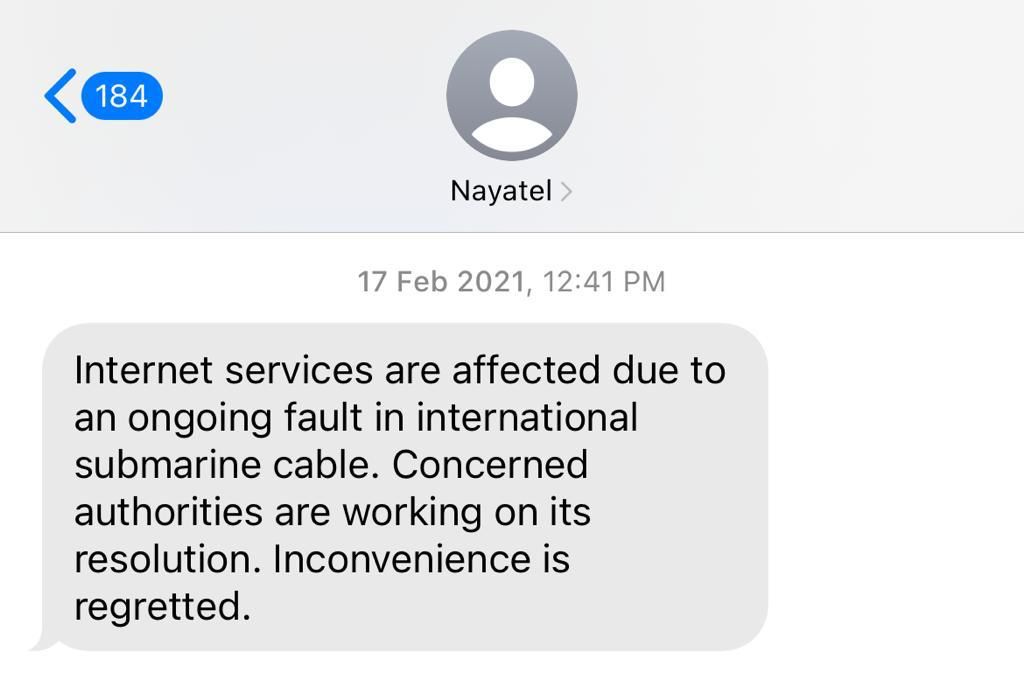 There is a myth that the reason for outages are sharks, but that is far from true. There have been no reported incidents, in Pakistan, of shark bite causing internet outages over the past two decades. The main nemesis of submarine cables is human activity, specifically fishing and anchorage. The sea vessel anchors and fishing equipment can reach the seabed and entangle with the cable laid down. When the anchor and fishing equipment is pulled back, it damages the cable in the process. Thus, the vulnerability of the cable increases near the beach as it is closer to human activity. 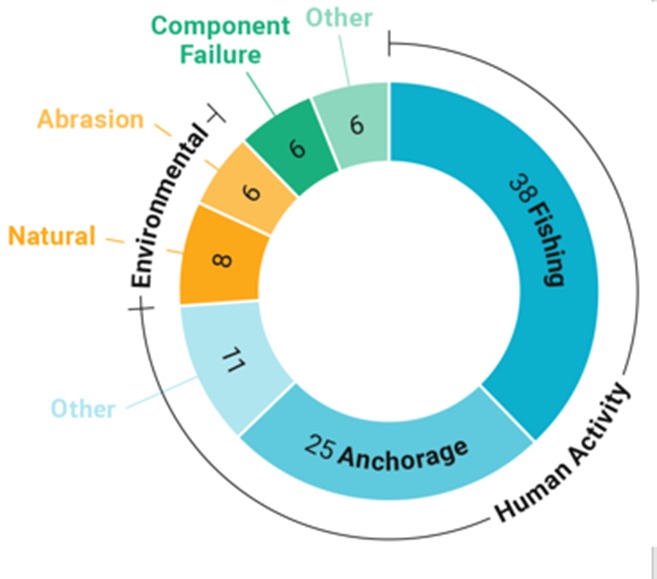 The damage that can be done to these cables is of two types; shunt fault, and cable cuts. The shunt fault occurs when there is damage to the insulation of the cable. It causes a short circuit as power is being supplied to repeaters from the power station as mentioned earlier. However, a single shunt fault doesn’t affect the traffic flow as the power is reconfigured from other power stations. However, dual shunt faults at opposite ends of the cable will lead to a halt in data traffic.

Cable cut on the other hand doesn’t only damage the upper insulation layers but also damages the inner fibre cable. This leads to data traffic outage on the affected cable.

The point of shunt faults are identified by measuring the reduction in voltage and tracking the distance back to the power feeding station. While in case of a cable cut a laser is passed through the affected cable and the point where signal breaks is identified and measured back to the landing station.

Once these faults are identified, a submarine cable solutions company is contracted to carry out the repair process. For instance, PTCL avails the services of E-marine PJSC, a subsidiary of Etisalat.

The service provider then deploys the ship to the affected area, navigated through a dynamic positioning system, where the damaged cable is lifted to the ship deck with the help of a grapnel. Here a spare cable is used to replace the damaged part and a joint is placed to connect the spare cable to the main submarine cable. Once the repair work is completed, the cable is laid back onto the seabed.

A one time repair process can cost upto $1 million and can take around three to four months. Therefore, incase of a fault, bandwidth of the cable is shifted to other available cables. 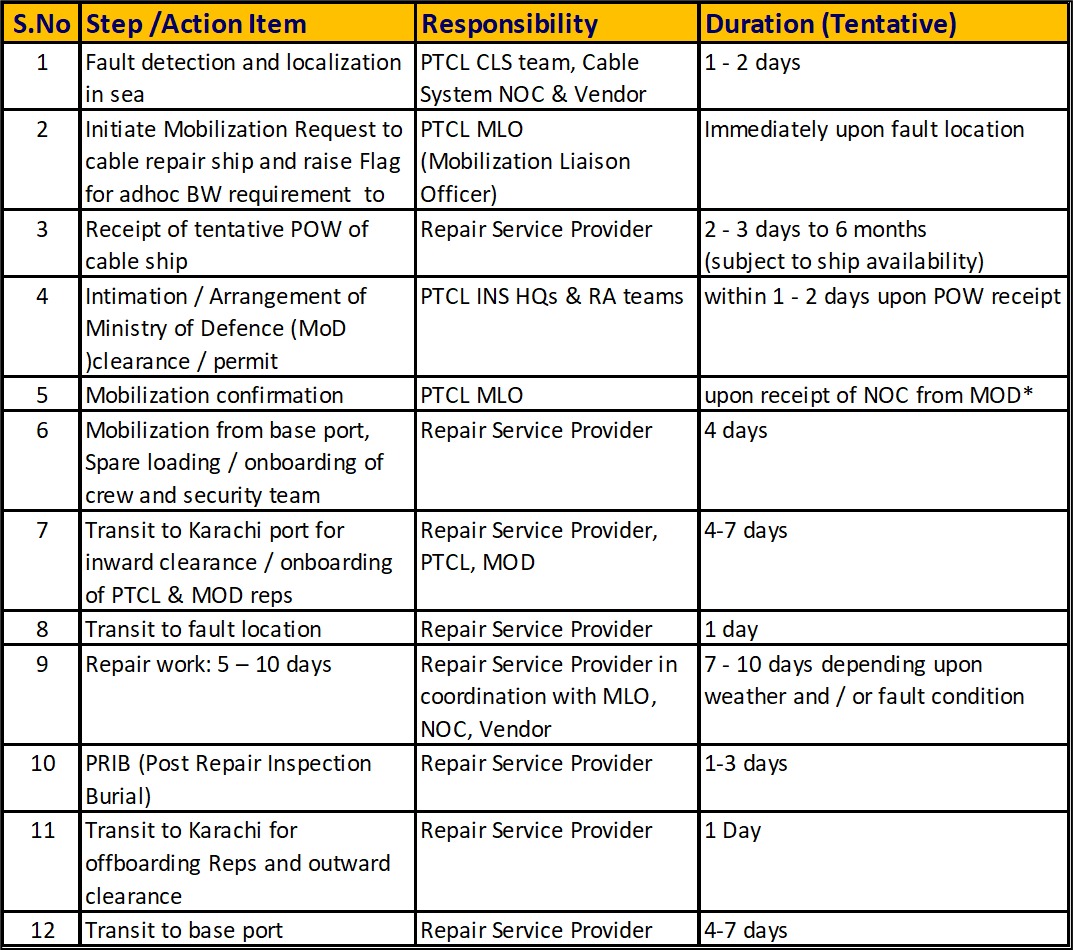 Damages to submarine cables are a costly affair and impact productivity. Therefore, to avoid them, best routes are identified for laying cables where human activity is low. Further, dedicated corridors are also specified around which human activity is restricted to prevent damages to the cable system.

Awareness programmes targeted towards fishermen and sea vessel operators also help in mitigating the chances of cable damage. However, completely eradicating the instances of submarine cable damage is not possible yet, and we may have to continue to bear with slow internet every now and then.