Social media is abuzz with a zany suggestion of replacing the currency presently in circulation in the economy with new currency that has an expiration date on it as a measure to account for the money that is lost during transactions involving corruption. The idea is that those who buck the system will be forced to return the black money they hoard when the older currency expires, and, in the process, will be held accountable. The black money will also rightfully belong with the state after it enters the system and gets accounted for. 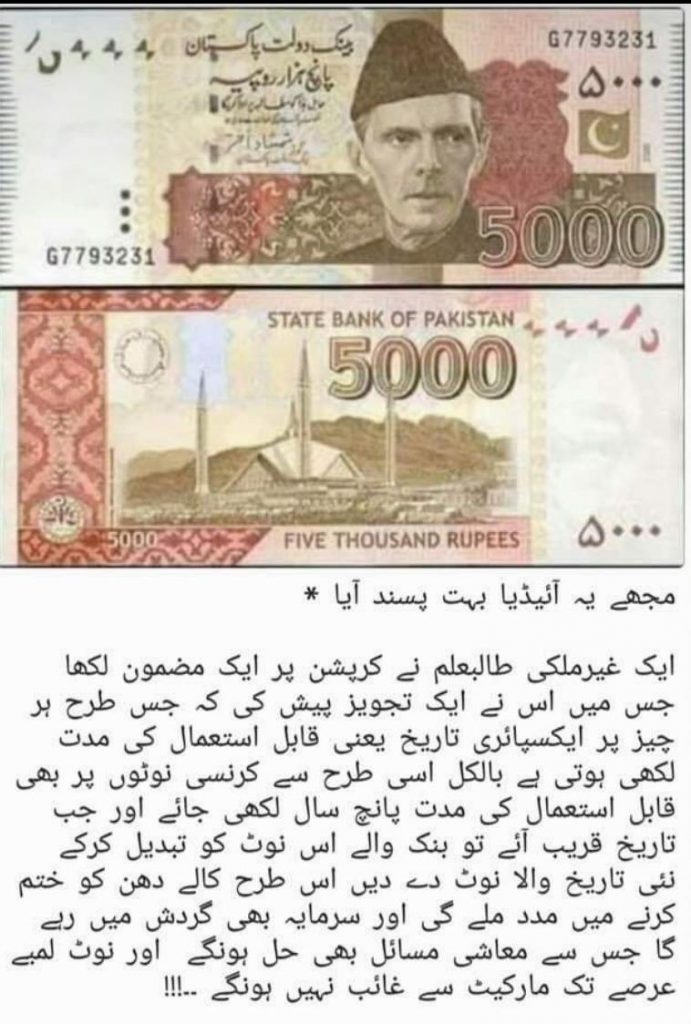 Should the government actually move ahead with this and announce the introduction of new currency notes carrying an expiration date of, let’s say, 5 years, with a grace period of ‘x’ months to replace the old currency with the new one?

The scheme was also proposed by veteran journalist Hassan Nisar on national television, who branded the idea as ‘out of box’ thinking. His conviction that the currency should have an expiry date was derived from the fact that everything has an expiry date including human beings. But Hassan Nisar is not an economist and, therefore, while standing true to his assertion, proposed to hold a debate between economists for validation of this idea.

Profit contacted four of the leading experts on economy to have their take on the sensibility of this assertion. Those who were contacted include Dr S Akbar Zaidi, Dr Nadeemul Haque, Dr Salman Shah and Dr Kaiser Bengali. All four of them have either directly worked in the government, or else been in a position to advise the government on key policy issues.

Besides perusing instances of such cases in other countries on the internet, Profit assessed the sensibility of Mr Nisar’s claim in the light of information provided by these experts.

While the idea of putting expiry date on the currency might sound fascinating to many, all four of these economists believe that this policy will not address the core issue of corruption because those who are corrupt don’t really keep their plunder in the form of cash. Profit elaborates the arguments presented by these experts below:

According to Dr Nadeemul Haque, those who steal and keep it in cash are petty thieves and those who are real thieves know how to keep black money. They will take it out of the country, buy a chateau or something, they will have it in dollars, in the Swiss Banks. They have thousands of other ways they can keep black money, he says.

This was concurred by other economists, with Dr Kaiser Bengali calling it a hair brained idea because in the scenario when expiry date is introduced on the currency, the hoarders of black money will convert their currency notes into other more potent forms like investment in bonds, real estate, gold, foreign exchange and foreign assets. But this measure does not address any of these forms.

Dr Zaidi says that moving cash into other forms is more beneficial for the corrupt as it hedges them against inflation and devaluation.

2. It will have a negative impact on the poor

Dr S Akbar Zaidi also called the idea impractical because it will affect the poor class more which is largely cash dependent. A large segment of the population, which is poor and illiterate, deals in cash and they will be at a disadvantage because: a) they might not be able to identify the expiry date correctly and get it changed on time b) due to a lack of education, they might be tricked into exchanging their new currency notes with older expired ones by con artists.

This was seconded by Dr Salman Shah who said that half of the people will not even know when their currency is going to expire. In rural areas particularly, he said, people are very simple who do not keep cash in banks. And if all of a sudden, they lose their currency because of expiry, it will be a crisis of confidence [in the system].

Moreover, Dr Zaidi agreed printing new money for the whole economy on a recurring basis is going to be a costly affair, which might, in the long haul, outrun the cost associated with the black economy.

4. It will lead to a slowdown in economy

Dr Zaidi says that transactions in the economy will become increasingly difficult as people would be unlikely to accept notes that are close to expiry, leading to a slowdown in the economy. This argument was supported by Dr Salman Shah who said that the demonetization drive in India to fight corruption by manipulating currency caused their economic growth to fall by around 2%.

Profit’s Verdict: Contrary to the claims of Hassan Nisar’s and others, putting an expiry date on the currency is likely to be more problematic for the country and, therefore, Profit gives it Total BS on its bullshit meter.

In response to the relentless hike in US dollar against Pakistani rupee, various campaigns online have urged Pakistani consumers to cut-off their purchase of...
Read more
Profit's Bullshit Meter

An increasing number of American and Chinese companies are feeling the damaging effects of the US trade war with China as it escalates. The...
Read more
Automobile