Sri Lanka import ban takes the spice out of life 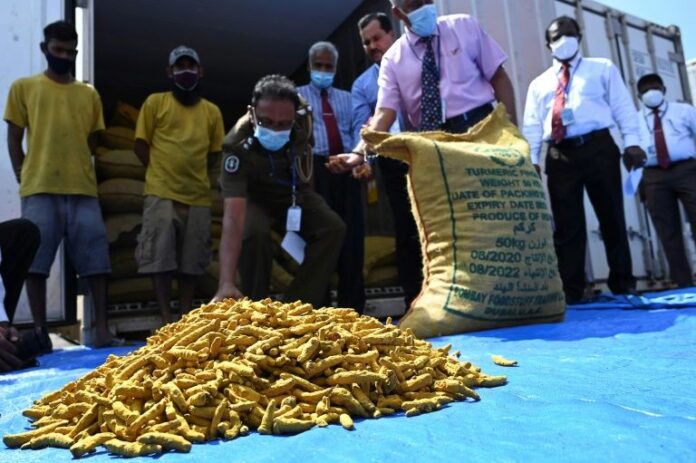 COLOMBO: An import ban in cash-strapped Sri Lanka is leaving a bad taste in the mouths of its curry lovers, depriving them of vital turmeric supplies and encouraging budding smugglers to take their chances with the spice.

With no foreign cash coming in as Covid-19 cripples the tourism industry, the government in March imposed a ban on many imports to stop money leaving the country, so that it can pay $4.5 billion this year to service its international debt.

Cars, floor tiles and machinery parts are among the items prohibited but it is a ban on turmeric that has the Indian Ocean island simmering with anger.

The aromatic root is a vital ingredient in curries and other local cuisine and also increasingly sought after as a health supplement.

But only a fifth of the 7,500 tonnes Sri Lanka consumes every year is produced locally.

Since the pandemic, demand has increased so much that prices have shot up 20-fold to an eye-watering 9,000 rupees ($48) a kilogramme — a week’s wages for many Sri Lankan workers.

“Our home-cooked curries are not the same since the pandemic,” said health worker Prarthana Weerasinghe, who claimed that many market varieties were now “adulterated”.

“We never thought turmeric would be such a big issue. We had taken it for granted. Now, we can’t afford to use it in our daily cooking.”

Customs agents recently found 25 tonnes of the spice smuggled into the country from India in containers marked “onions”, while navy patrols have seized several tonnes from Indian fishermen.

Those seeking turmeric have watched on helplessly as officials burn seized turmeric at crematoriums, claiming they do not want to flood the market and depress prices.

The government says it wants to promote local production over cheap imports as hundreds of thousands have lost their jobs and the economy recorded its worst-ever contraction of 3.9 per cent last year.

Prime Minister Mahinda Rajapaksa’s ban on “non-essential” items has also seen a surge in prices for other goods, including car tyres, floor tiles and even toilets.

“There are no foreign brand tyres available for small cars,” a dealer in Colombo said. “Those who have stocks have jacked up prices.”

Kasun Chaminda said he had lost regular customers for his taxi operation because he could not buy new tyres.

“When they realised that I was unable to replace the worn tyres, they cancelled the (regular) hire. It is dangerous to run with worn tires, but I have no choice.”

And with banks prevented from releasing dollars to finance car imports since March, the second-hand car market has also shot up, with the price of used vehicles almost doubling.

Locally assembled cars, which are generally shunned as being of lower quality, are also suddenly sought after.

There are still those seeking foreign rides on the sly — customs seized 12 smuggled cars hidden in containers last month — the forged documents said the containers were for a diplomatic mission.